The Canadian Museum of Human Rights in Winnipeg is asking for marriage photos from same-sex couples couples for the museum’s opening exhibit in 2015. 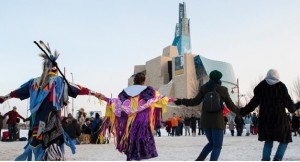 The exhibit pays tribute to the struggle for gay rights, but it is also intended to “normalize” LGBT relationships for people who are perhaps a little homophobic.

For the most part, the LGBT community supports the exhibit but lots of people would rather keep their experience private. As Chad Smith from the Rainbow Resource Centre in Winnipeg told Global News, “There’s still a lot of fear around homophobia and discrimination. While this is important, not everyone wants to be too visible.”

I can’t wait for that day we say “wtf were we thinking? Why was same-sex marriage even an issue?” Sure, a lot of us already believe this, but the truth is plenty of Canadians are still homophobic.

On March 3, the Quebec government launched (another) campaign to foster LGBT tolerance by showing sexual diversity in everyday scenarios.

This idea of “normalizing” LGBT people is, on the one hand, very funny to me. Funny because it means people need to be convinced that being gay doesn’t mean you live in bizarre-o world. Unfortunately, lots of people need to be reminded of that. So on the other hand I think the campaign is kind of effective. The basic message is right; it’s not (shouldn’t be) weird for LGBT couples to show affection and tenderness.

And the ads are pretty “vanilla” as one person commented, so if they make you uncomfortable, I’m sorry, but you have a problem.

At least it’s a start though. Call me an optimist but I don’t think people’s attitudes are fixed on stuff like this—exposure has a lot to do with beliefs.  Many people aren’t gay and not everyone has gay friends. For those people who don’t interact with the LGBT community ever, these ads really could help change their attitudes.

Same with the museum. Showing people that same-sex couples are just as normal or fucked up as any straight couple may really be eye-opening for some people.

It may also remind them that in the ’60s people went to jail for being gay, and that it’s been just eight years since gay marriage was legal nation-wide. And it just may help curb social discrimination which is still very real. (Think about it; how many “casual” gay jokes do you hear or read every day?) I think displaying the struggles of fellow human-beings  in a museum is a step in the right direction, towards putting homophobia in our past.