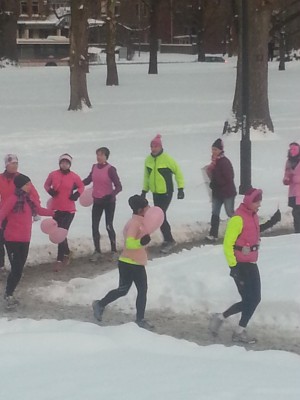 Standing in knee high snow in Queen’s Park yesterday, I witnessed my very first protest run. The event, which was organized by journalist and university instructor Margaret Webb, was to protest Russia’s anti-gay propaganda law, particularly in conjunction with the Sochi Olympics. I watched as the group of protestors ran around the designated route, holding high signs and pink glow sticks, in total defiance of social injustice, and the freezing cold. It was quite a sight, as the runners formed a flowing pink triangle, a reference to the badges homosexual prisoners were forced to wear.

The Sochi Winter Olympics, which start today, has been considered one of the most controversial games to date, if not the most. There are a multitude of reasons for this: from massive over-spending (the original budget was set at an already costly $12 billion, and is now at a staggering $51 billion), to the environmental impact the massive reconstruction of the resort town has caused (one reporter claimed she was warned not to splash water from the tap onto her face as it “contained something dangerous”).

But while these problems are certainly concerning, they aren’t out of the ordinary for the Olympics, which every year seem to get more and more outrageous. Russia’s anti-gay stance, however, casts a long shadow over the whole event, for much of the world—including Webb, and those who joined the protest.

“I listened to the things Putin was saying, and was horrified. This law, which is just Putin’s own belief, not Russia’s, is nothing but discrimination and I felt I had to do something or I couldn’t enjoy the games.” 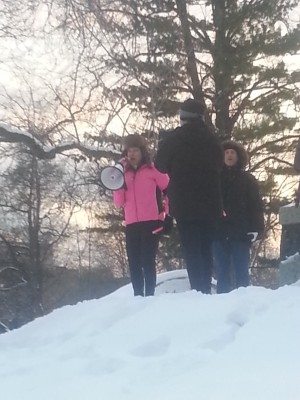 The law, which passed last June, states that it is illegal to demonstrate “non-traditional relationships” in front of minors. That means you can be thrown in jail for holding hands with someone of the same sex in front of someone under 18. While not directly connected to the Olympics, this law is pretty much contradictory to the event’s spirit. After all, the Olympic charter states: “The practice of sport is a human right. Every individual must have the possibility of practicing sport, without discrimination of any kind and in the Olympic spirit, which requires mutual understanding with a spirit of friendship, solidarity and fair play.”

Putin has told media that gay athletes and tourists would not be in any danger from the law, but added “but please, leave the kids alone”. Many countries, such as the U.S. and Canada, are putting pressure on Russia to can the law, and have openly spoken out against it. There is no sign, however, that Putin will make any changes. 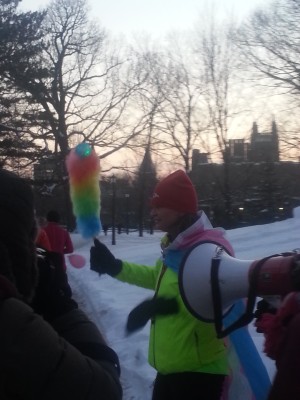 Back in Queen’s Park, more and more runners keep showing up despite the weather (I’m somewhat certain I’ve lost a few toes to the cold). They join in with the flowing, glowing pink train, and take up the chant “Put the Poof in Putin”. All across the country similar protests are happening; people are making the statement that what is happening in Russia isn’t right. Even Google changed its doodle to a rainbow design of Winter Olympic sports.

“We want to show the world that we will not stand for such discrimination,” Webb tells me, “that Canada accepts all athletes, regardless of their sexuality. We want to do it in a peaceful, creative manner, and we want to send that message to Russia, with love.”