When 13-year-old McKenna Pope went to buy an Easy Bake Oven for her little brother (who requested one from Santa), she was appalled to discover that the Hasbro toy only featured females on its packaging, and was only offered in the stereotypically female colours of pink and purple. 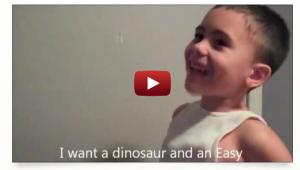 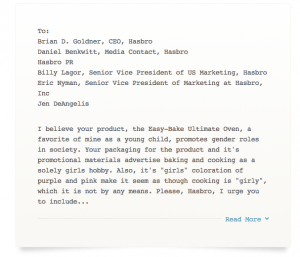 The petition has gained such traction since it was posted about two weeks ago that a slew of big-name chefs have now made their own YouTube video titled, “Everyone Can Cook.” It features an array of chefs, including Top Chef’s Michael Lomonaco, voicing their support for Pope (and for her brother, who really just wants to be able to cook without using a light bulb or a pink oven). As the petition page, written by McKenna, reads:

Imagine my surprise when I walked into his room to find [my brother] “cooking” tortillas by placing them on top of his lamp’s light bulb! Obviously, this is not a very safe way for him to be a chef, so when he asked Santa for his very own Easy-Bake Ultimate Oven, produced by the Hasbro company, for me to help him be the cook he’s always wanted to be, my parents and I were immediately convinced it was the truly perfect present.

However, we soon found it quite appalling that boys are not featured in packaging or promotional materials for Easy Bake Ovens — this toy my brother’s always dreamed about. And the oven comes in gender-specific hues: purple and pink.

I feel that this sends a clear message: women cook, men work.

I have always been adamantly against anything that promotes specific roles in society for men and women, and having grown up with toys produced by the Hasbro corporation, it truly saddens me that such a successful business would resort to conforming to society’s views on what boys do and what girls do.

I want my brother to know that it’s not “wrong” for him to want to be a chef, that it’s okay to go against what society believes to be appropriate.

Seeing young (like, really young) people take a stand is adorable, but more than that, it’s inspiring. Pope saw that something was off in the world, so she went about setting it right. We can all learn something from Pope about passion and equality and standing up for what you believe in. She’s proof that one person can be turned into an army. (While Hasbro hasn’t made any public comment, Pope’s mother told the Associated Press that McKenna is scheduled to meet with the company on Monday.)

I admit that the problem of boys wanting to play with Easy Bake Ovens had never crossed my mind until Pope made it public, but it makes total sense. There should be a gender-neutral one. We should be encouraging young boys to make food (and do other things they like to do that might be considered “for girls”) as much as we can. Because what’s more attractive than a man who can cook? (No, but, actually?)