“I tried to remember any case in the course of my reading where two women are represented as friends.” 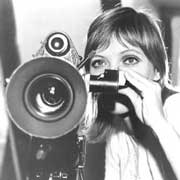 There’s a hoary old cliché about male nerds that they’re perennially afraid of women, clamming up whenever one begins to talk, scoffing through their retainer at the thought of one intellectually matching them on matters of science and technology. You know it’s nonsense, I know it’s nonsense—it has no cultural value other than to bolster tension in a particularly poor episode of The Big Bang Theory.

Yet, the Star Wars trilogy, the Lord of the Rings trilogy and Star Trek—inarguably three of the most popular franchises in the sci-fi/fantasy canon—have each failed the Bechdel Movie Test, the benchmark test for examining how well a movie represents women[1]. And it’s not just the so-called “nerd culture”; big 2013 releases like Pacific Rim, Oblivion, and This is the End have all failed the test. So who’s to blame? Is it true, that the pop culture populace is wary of accepting well-rounded women characters? Or is it the production companies, looking to green-light only movies they know will sell, being too lily-livered to take a chance on strong women? Whoever it is that’s perpetuating it, I’ll tell you who’s not putting up with this shit: Sweden.

Four Swedish cinemas last month launched a feminist ratings system for their movies, based on the Bechdel test. To receive an “A” grade, the movie must pass all three of the following:

You’d think that’d be easy, right? Well, it’s surprising how many well-known films don’t make the cut. “The goal is to see more female stories and perspectives on cinema screens”, says Ellen Telje, the director of Bio Rio, one of the four theatres. According to a study by the Center for the Study of Women in Television and Film, in the U.S.’s top 100 releases in 2011, only 11 percent had female protagonists.

The ratings system is unlikely to put a feather in the cap of gender equality and call it solved, but, as with most things FTW, it’s the gesture that matters. Awareness of any kind on this issue—since it is an issue that, sure, people just don’t realize when they’re being entertained—is a move toward critical thinking, which is itself a move toward change.

We’re not saying don’t keep making Star Wars films (or at least I’m not, not yet) just give us an intelligent woman. Even a long time ago, in a galaxy far, far away, I’m sure they existed.