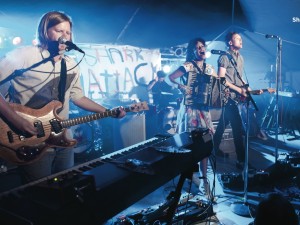 When an unknown band called Shark Attack appeared as a headliner on the lineup for the 2011 edition of Sappyfest, Julie Doiron thought it was strange even for the little rock festival she helped found in Sackville, New Brunswick, in 2006.

It wasn’t until her fellow festival organizers snickered and assured her the band had won Grammys and Junos that its true identity became clear, confirming the rumour of the day. Arcade Fire, under the name Shark Attack, would play to an audience of fewer than 2,000 enthusiastic music lovers that Friday night.

Small or large, the festivals that crowd the calendar in this country’s warmer months serve an important function. “Shark Attack” excepted, emerging bands need willing audiences to build a fan base, and festivals are where music fans congregate.

“A lot of music fans are pretty casual, passive music fans,” argues Sean Michaels, Montreal-based writer for the influential music blog Said The Gramophone. “So big festivals are a way to see lots of artists for a single price—the old familiar acts, the cool new ones.”

For the emerging artist, the opportunity to gain exposure but also to meet other musicians and industry types is priceless. “It’s definitely good if you’re just starting out because there’s always going to be people around watching, even if you’re not on the most popular stage,” says Doiron, who many know from her career as a singer/songwriter and as a member of the seminal Moncton indie rock band Eric’s Trip.

It was a lucky break for Sappyfest that Arcade Fire was in the region to open for U2 the next night. Add in the accolades Sappyfest received for its programming of soul singer Charles Bradley the same year (“probably the best festival experience I’ve ever witnessed,” Michaels says) and you’ve got a fine example of what can be realized when everything goes right at a Canadian festival.

“My favourite festivals are the ones dedicated to building magical moments,” Michaels says. “Unusual shows in unusual places, beautiful juxtapositions, the gift of excellent (and adventurous) curation.”

In Canada there is no shortage of these smaller, well-curated festivals ideal for music discovery, from Sappyfest to Wolfe Island in Lake Ontario, ALL CAPS! on Toronto Islands to Dawson City in the Yukon, which Doiron and Michaels both mention as favourites.

On the other end of the scale are the festivals that draw tens of thousands of fans in a weekend, such as folk festivals in Edmonton and Winnipeg, Ottawa Bluesfest, North By Northeast in Toronto or Osheaga in Montreal.

The common denominator seems to be the same for festivals of all sizes: The pull of a big-name act might draw attendees, but the fun really begins with the happy accident of stumbling across a new favourite artist.

“Almost all of us have wandered into a field or under a tent and asked: ‘Who the hell is this?’ It’s a singular thrill,” says Michaels. “I remember the first time I saw Colin Stetson, at Pop Montreal in 2008. At the suggestion of a friend I bicycled breathless up St-Laurent, to the Ukrainian Federation; hustled into this beautiful, grand and ramshackle building, sat in the pews with no more than 20 people; and then got destroyed and remade by the spirit of one man and a saxophone.”

Mason Wright is a Toronto-based writer, editor and web producer who
loves everything about music