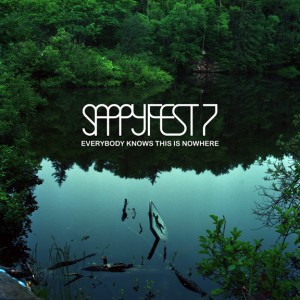 The theme for this weekend’s SappyFest may be “everybody knows this is nowhere,” but in reality, the music festival has put a giant “you are here” arrow on Sackville, New Brunswick.

Started in 2006 by local music label Sappy Records (musician Julie Doiron, artist Jon Claytor and label chief Paul Henderson), the fest is one of the coziest and most laidback parties in the country. All events take place in venues along the town’s movie-set main street, which shuts down to accommodate two large tented areas that have a capacity of around 2,000 people (compare that to this weekend’s Osheaga Festival in Montreal, which can accommodate up to 35,000).

As in every year, the programming deftly mixes festival favourites like Doiron and Michael Feuerstack with rising stars like Cold Specks and Yamantaka // Sonic Titan. The organizers also have a soft spot for the unconventional – in past years they’ve brought in eclectic crowd-pleasers like BJ Snowden and Charles Bradley. Alternative visual arts, literary, film and performing arts events provide entertaining diversions.

Although the festival has scored some big names, most famously Arcade Fire played a secret show in 2011, what makes me sappy for Sappy – and why I think it’s been so successful – is that despite its success, it’s stuck to its values and commitment to the community, and stayed clear of major sponsors. Even if your festival-going heart is two sizes too small, it’s hard to be cynical watching kids dance to Old Man Luedecke‘s banjo or ignore the love as diehard fans brave torrential rain to witness an Eric’s Trip reunion, as they did in 2009.

It’s a similar setup at Hillside Festival at Guelph Lake Island. Last weekend while walking around the four stages, I did not see a single banner for a major booze or cell phone company. All alcohol and food vendors are local and carefully vetted (Indian tacos! Dumplings! Grilled corn!) and meals are served on reusable dishes, which feels pretty darn civilized for a music fest. Last year, organizers raised money to purchase cutlery, this year they’re hoping for a solar-powered dishwasher.

Although Hillside has a reputation for being a big hippie party, and workshops about awakening your belly fire certainly don’t help, the festival has become one of the loveliest ways to catch Canadian indie musicians like Chad VanGaalen, Doldrums, Sandro Perri, Young Empires, and Rich Aucoin. It’s also the perfect festival to go swimming, drink homemade lemonade or local brew, catch a nap or watch kids spin themselves into vomit territory on a homemade merry-go-round.

It’s rare to leave a music festival with any sense of collective belonging, and perhaps that’s the root of my gushing. But I’m not the only one. Alison Creba, who set up a private, postage-free mail service in Halifax to encourage letter writing, has also set up a City Mail service where SappyFest lovers in Toronto, Halifax and Nova Scotia’s South Shore can send notes to their favourite band, organizer or attendee. So even if you can’t make the festival, there are still ways to show “nowhere” how much you care.

If you really want to pretend you’re at Sappy, the organizers have a free downloadable album of most of the musicians that are performing this year.