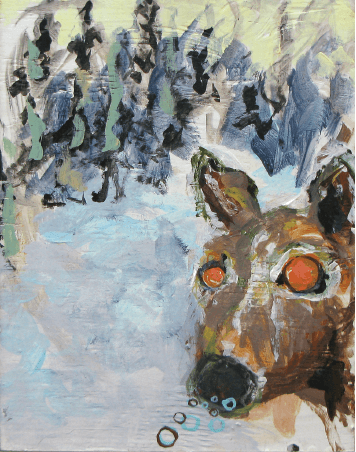 Beer in hand, Greg Smith sits in a chair wedged into a corner. A microphone stand, angled overhead, partially frames him. The room is full of instruments: four- and six-stringed guitars on stands, a mandolin hanging from a hook, a drum kit and keyboards facing one another.

But the space is meant for more than music. A folded-up easel, stacks of brushes and tubes of paint spread on a tray and walls covered in canvases in various stages of completion attest to that.

“I really want to develop a whole body of work,” says Smith, who plays bass for the Weakerthans, and guitar and vocals for his own band, the Très Bien Ensemble.

Springing out of his chair, gesturing from the floor to the wall with two open hands, he asks, “Can I take what I do here and put it there?”

Smith first asked himself that question while on tour with the Weakerthans. While on the road he was often struck by an environment (urban and rural), scene, object or motif. He then sketched what he saw, or committed it to memory. In 2007, he began to produce paintings of the strongest studies and memories. With subsequent tours, he painted more. (A Smith painting appears on the cover of the band’s last release, Live from the Burton Cummings Theatre.)

From the start, Smith has made abstract, expressive work, driven, like music, by “rhythm and heat” and “energy.” He uses acrylic paint “because you can work fast with it,” he explains. “You can build the paint up, it dries fast and it’s easy to clean.” Right now he works on canvas, building up the paint to get texture. He first painted on board, buying wood off-cuts from Home Depot. The grain and knots helped shape the process and end product.

There are small, square and abstracted portraits of authors Smith likes, such as Margaret Atwood and poet bill bissett. Larger, rectangular and vertical views to towers and high rises suggest an interest in light and shadow, and how the two interact and are interdependent in the built environment. Smith applies the paint in one long brushstroke, allowing it to thin, the colour to fade and for the white of the canvas to show through. (Mind you this is one of the unfinished works in his studio.)

In one of two large works in progress, the outline of a hogweed plant is recognizable. The plant appears to loom, imposing itself on the viewer. But Smith intends the inverse: “I want to give it this reverential viewpoint.” By doing so he challenges a commonly held view of an invasive species. Can we ever accept them as belonging, beautiful?

There’s truth in that approach, according to Matt James, a book illustrator and old friend of Smith’s. James, Smith, and another artist, illustrator Glen Halsey, share the space, which is actually an apartment over a bar in Parkdale, a west-end Toronto neighbourhood.

“What I find most inspiring is the freedom that he allows himself,” says James by email.

Smith and James, who won the 2013 Governor General’s Literary Award for Illustration for his book, Northwest Passage, met in high school in Woodstock, Ont., some 25 years ago. They bonded over music, such as punk’s visual cues and culture. Both were drawn to Toronto’s music and art communities. (Smith originally enrolled at George Brown College to study graphic design. After barely a semester there was a strike and he never went back.)

“It can be kind of helpful to see your own art through someone else’s eyes from time to time,” says James on his ongoing “exchange” with Smith. “But ultimately the best thing he could say to me or me to him is ‘keep going!’ or, maybe, ‘stop!'”

For now, Smith comes to the studio two or three times a week to paint and jam. He has plenty to keep him going in both pursuits. He’s looking for his next opportunity to show his art—he’s done so publicly three times—and work on new songs has begun.