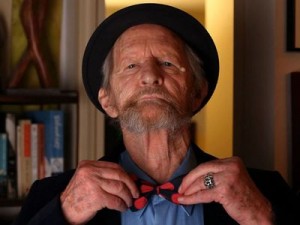 Whenever I think about the pursuit of fame (the pre-Kardashian era), my mind automatically tracks back to reruns of the 1980s TV show Fame, and Debbie Allen warning Leroy et al about the price of pursuing your creative dreams. “Fame costs and right here’s where you start paying – in sweat,” Allen warns her students, digging into the floor with her fancy walking stick. But buckets of sweat don’t guarantee success, especially in the arts where changing tastes and technologies have killed more than just radio stars.

And then there’s Hugh Oliver. Born in 1929, the 82-year-old Toronto musician is the subject of a new documentary, The Ballad of Hugh, which premiered at the NXNE movie festival. Directed by musician and newbie filmmaker Marco DiFelice, the one-hour doc follows Hugh as he recorded his album, …And All That Crap, which was also released during the festival.

Oliver, who was born in Epsom, England, had some success as a songwriter in the early 1960s partnering with famed producer Glyn Jones. Although those days are well behind him, the bowtied Oliver enjoys a cult following at the city’s downtown Tranzac Club with his Roger Miller-esque pop ditties that reveal a dark poetic humour and a surprising awareness of pop culture (check out “Justin, Bloody Justin, Bloody Bieber” or “Lady Gaga, You’re a Thing”).

The film is light but maintains some charm because DiFelice is obviously a fan and has no interest in turning Oliver’s story into an artificial outsider-art tragedy (or making him into a hipster icon) and Oliver, who isn’t afraid to be filmed shirtless or without his teeth, is having a grand old time recording with the likes of Mary Margaret O’Hara and Ian LeFeuvre. At its core, The Ballad of Hugh is just a gentle reminder that while music might be a young person’s game, the desire to have people respond to your creative expression—whatever it is—never vanishes.