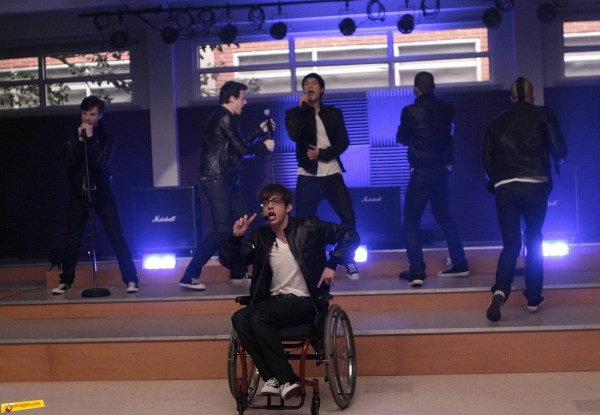 Sometimes it seems that no minority sits on a higher horse than people with disabilities—give an inch and they want a mile.

I bet that’s what creator Ryan Murphy,  executive producer Brad Falchuck and the rest of the creative muscle behind Glee thought, in their most private moments, once they started hearing the complaints from disabled viewers and those actors with disabilities still fighting to break through television’s representational barriers.

At issue is one character in particular, Artie Abrams. He is probably the most complex and nuanced wheelchair-using teen on television. I would hazard to say we’re finally seeing ourselves accurately and respectfully, not just represented, but legitimized on a hit television show.  Artie is fully realized, you might even mumble “reality” under your breath when no one was looking, if it weren’t for one major detail that has the activist and soapbox crowd among us up in arms. Artie is played by able-bodied actor, and former boy-band member, Kevin McHale. He is not a paraplegic and for those advocating for disabled talent in Hollywood, along with those who truly want to see themselves on television, this is yet another sign of Hollywood’s glass ceiling where disabled people are concerned.

It’s not like their concerns are unfounded. The stats, so often cited, come from the Screen Actors Guild [SAG] UCLA Study on Employment of People with Disabilities in the Entertainment Industry, commissioned in 2005. It tells us that 20% of the American population between the ages of 5-64 is living with a disability and yet, they are represented by less than 2% of the characters on television. Worse than that, only one-half of 1% of the words spoken on television are spoken by someone with a disability.

When I asked Adam Moore, SAG’s associate U.S. national director of affirmative action and diversity, last winter for my “Coming Attractions” article in Abilities Magazine, why this was the case, it essentially came down to an inability to prove discrimination was taking place beyond anecdotal statistics. Disabled performers don’t want to self-identify, for fear of being passed over in auditions, and producers are uncomfortable with keeping track of the number of disabled people on set (the way they’re required to for other minorities in the union) because they feel unable to tell what counts as a disability.  Their questions surround whether they should count invisible disabilities or temporary injuries. All in all, not having the proper information prevents SAG from doing anything on their own because they can’t prove it.  Even when they joined forces with American Federation of Television and Radio Artists [AFTRA]  and Actors Equity Association [AEA] at the beginning of the year for the I AM PWD tri-union campaign, the initiative has gone largely unnoticed by mainstream audiences and there’s no real visible employment spike to be found.

Right now, articles like this one from Associated Press have Glee in the employment inequity crosshairs. The barbs have already started flying, especially in light of the show’s recent disability-focused episode called “Wheels”.  Robert David Hall the chairman of the I AM PWD campaign, who is best known for playing C.S.I: Las Vegas coroner Al Robbins, had this to say to Associated Press.

“I think there’s a fear of litigation, that a person with disabilities might slow a production down, fear that viewers might be uncomfortable. All of that is nonsense, I’ve made my living as an actor for 30 years and I walk on two artificial legs.”

What Hall says is true; it also costs productions more to implement adaptations for disabled talent in some cases, but none of those reasons or excuses should be laid at the feet of Glee. If anything, Glee’s creative team did a better job striving to achieve employment equity and represent minorities on television than their critics in the disabled community did in assessing the validity of their criticism against the show.

Glee is a hit series working in the tradition of  High School Musical and Fame. It follows a fictional high school glee club through the ups and downs of teen life. It is known for mixing hit songs past and present into musical mash-ups and then giving them the full Broadway treatment. It also goes a step beyond: conscious of the fact that television has the ability to shape attitudes and perceptions, their creative team intentionally built a cast representing every culture and visible minority. There are white characters, black characters, Asian characters, gay characters, Latino  characters, Jewish characters, Christian characters, male characters and female characters. The principal of the school is not white, but South Asian, and, of course, there’s McHale’s character Artie as the person with a disability.

Falchuck told the AP that they did this to not just reflect the so-called “mainstream,” but to reflect America as it really is. Of course, critics can turn around and say that they aren’t really reflecting America because there isn’t a real disabled person in the cast. In the same article though, Falchuck does say that they did look at people in wheelchairs for the role of Artie.

“We brought in anyone: white, black, Asian, in a wheelchair,” Falchuck said.

Really, that’s all you can expect from casting directors. The disabled community is absolutely right in cases where disabled actors aren’t even allowed to audition.  Joanne Smith, former host of CBC’s Moving On, revealed in a recent Abilities article that some casting directors point blank told her they don’t want to hire people with disabilities because of a lack of talent or too much politics involved in the decision.  However, even Robert David Hall admits that you have to earn the role you audition for, disability or not.

“Society has had a telethon mentality for a lot of years. If we’re doing a story on Aaron, then we will play soft piano music and talk about the brave little writer with a cane—that sucks. The best way to avoid that is to always do good work. We’re competitive with the entire world and our job is to do the best work we can,” he told me when I interviewed him for Abilities last winter.

Even the most staunch disability activists don’t want to be hired to fill a visible minority quota. In the case of Artie, casting directors needed a triple threat performer. He needed to sing, act and follow choreography. In Kevin McHale, they found someone who could do all that and play an instrument as well.  “It was very hard to find people who could really sing, really act, and have that charisma you need on TV. It’s hard to say no to someone that talented,” Falchuck told AP and so far, he seems to be right. There are disabled people who can sing, act and dance (either in pairs or individually), but I have yet to find any disabled person who can do all three.

So while the casting directors need to give us a shot at auditioning, performing arts schools need to be willing to train us and agents need to be willing to represent us. That way, when when casting directors try to cast a disabled triple threat they might actually be able to find one.  When I say represent and train us, I mean not in a Special Olympics, everyone’s a winner, it’s enough just to participate, pat you on the head and give you a lollipop kind of way.  Not even in a segregated-under-one-roof, institutional, Famous People Players kind of way. There are a few organizations, like Lights, Camera, Access and Witt Entertainment Management Inc. willing to train and represent disabled actors, but both of these are small potatoes compared to the amount of professional talent with disabilities that needs to be out there to penetrate the market in big numbers.

Remember, just because a disabled actor with talent makes it through, even when they get a supporting and speaking role, doesn’t mean the creative team knows what to do with them. Vince Gilligan cast RJ Mitte in Breaking Bad in tribute to his friend with cerebral palsy, but after that stand-up move, the show has been on for two seasons and Mitte’s character hasn’t been given a significant storyline while everyone else in the principal cast has. Mitte has had his moments and he has had his scenes, but often he simply walks on set, says a line and walks off again—a clear indication that Gilligan doesn’t know how to write for him.

I’d rather have a non-disabled actor (who obviously takes the responsibility of playing a disabled character seriously) shown as a full  participant of the show, whether it be through a solo, playing a guitar, prominent roles in the choreography, or having a whole episode devoted to him, than have a truly talented disabled actor on set used as a token.  All of those articles that feature criticism from the disabled community over Glee’s casting, neglect to mention that they added a supporting role that is a person with a disability. Lauren Potter is an actress with Down’s syndrome who takes Quinn Fabray’s spot on the cheerleding team, but who isn’t given a free pass just because of her disability. Coach Sue Sylvester is realistically tough on her.

That’s another thing about Glee. In the “Wheels” episode, they dealt with disability issues in a tongue-in-cheek, but not mocking or stereotypical manner. They dealt with things like sex and disability realistically. (I have actually had to confirm the functionality of my penis in real life and I’m not the only one) It seems Kevin McHale appreciated how the show handled disability as well, as he told the New York Post:

“Going in, none of us knew anything about our characters so we kind of made up back stories for them, so when I read what happened to him, I thought it was very cool. And I love how they did it too, how his story fit into the context of the episode. It just kind of sums up ‘Glee’—you have this sweet story and then I say, ‘but I still have full use of my penis.’ That’s like a metaphor for our show.”

People seem to forget that it’s okay to have a sense of humour about disability.  Recently, deaf organizations have been squawking about how offensive the Family Guy Presents live special was for making fun of deaf actor Marlee Matlin. They seem to forget that the cast was laughing with her because she was in on the joke the whole time.

I often think that if disability organizations put as much effort towards creating and fostering disabled talent as they seem to in their whining and issuing press releases regarding injustices towards them, then casting directors may actually see a lot more talent with disabilities. People with disabilities need to start opening up about their circumstances. More people with disabilities need to pursue jobs in Hollywood, rather than avoid them out of fear. If you really have problems with the way the able-bodied world represents us on television or in any other media, maybe you should write a script, make a film or study acting. Who better to write dialogue for a disabled character than someone with a disability?

Watch the entire “Wheels” episode of Glee and tell us what you think.