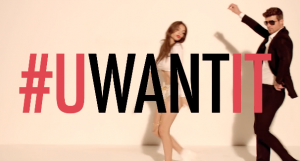 You’ve probably heard the tune, though you may not even know it—it’s definitely a candidate for 2013’s song of the summer, alongside Miley Cyrus’ also contentious We Can’t Stop. It’s floating in the air on every patio, blasting from cruising cars, oozing along the sidewalks in the club districts. “#BLURREDLINES” billboards loom over this city.

My nearest and dearest, and unfortunately those who spend days in the office with me, know that I am an unabashed pop music fan. My current playlist includes “Stars Are Blind” and “Promiscuous.” And the songs of  summer get me the worst—they are ultra-glitzy and wacked out, exactly what I love about the oft-maligned genre. And I’ve always been a sucker: I jumped right on the Umbrella train in 2007, and Heartbreaker has had regular rotation since 1999—though I’m still not totally sure how Big Girls Don’t Cry ended up my most played song on iTunes.

Pop music is my vice of choice and I go to extremes, like many of us tend to do with our vices. I ignore the misogyny, skimpy outfits, twerking, conspicuous consumption, glamourization of violence, the whole nine yards, to sustain my love of pop music. There is a lot that I have to prevent myself from thinking critically about—and usually I manage.

But Robin Thicke’s Blurred Lines posed a big problem, and not just for me. I was reading articles about it and watching interviews where he made excuses for it long before I even heard the song. The blurred lines of the title—in case you haven’t heard the song—are the blurred lines between rape and consensual sex. Here are some of the song’s more choice lyrics:

I know you want it

I know you want it

The way you grab me

You must wanna get nasty

I hate these blurred lines

I won’t go into the specifics of why the rape/consent thing is an issue (though I can point you to some of the more high-profile rape cases this past year, and I’ll point a fat finger at the rape-deniers who perpetuate that particular brand of garbage) but I will offer you this gem on a silver platter, a palate-cleansing Haligonian re-imagining of Blurred Lines, Ask First!

Videographer, editor, and one of three directors of Ask First, Brendan Anckaert, says of the project: “It was super fun to make and I think creating fun, sexy, silly responses to shitty, lazy pop music that promotes rape culture is a great way to promote consent and a radical analysis of the world we live in.”

The lyrics are posted on the Vimeo page—but here is a sample of Robin Thicke’s iffy lyrics redone by the Ask First crew:

No way to know I want it

No way to know I want it

Unless I say I want it

Cause if you grab me

These folks have assuaged (some) of this pop music-lover’s guilt.