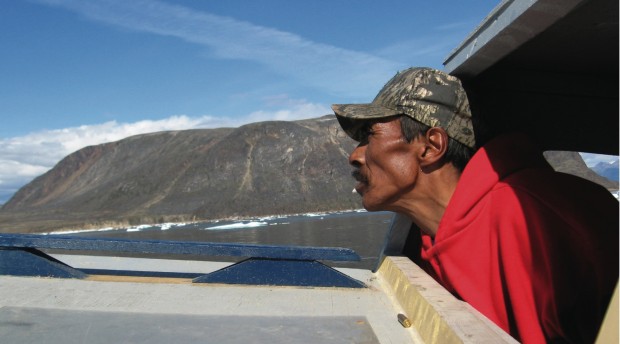 When climate change first started showing up in the news, people feared Canada’s North would literally melt away. As scientists debate and differing opinions—and confusion—abound, that initial panic seems to have ebbed. Amongst nearly everybody, of course, but the Inuit. After a lifetime of observation and generations of knowledge, Inuit elders say the melt is already happening. Their insight may be one of Canada’s greatest untapped resources, providing untold first-hand insight into the Inuit people’s traditional world and its changing climate. So why is no one listening?

From the age of five, Inuit children go outside to meet the morning. They look at where the wind is coming from and how cold it is; their parents quiz them on their observations. In the North’s extreme weather, life is inextricably linked to the environment—and that environment is changing. Leanna Ellsworth, Policy Advisor on Climate Change for Canada’s Inuit Circumpolar Council, says the warmer temperatures affect infrastructure built on permafrost, animal migration routes, abundance and, therefore, food supply. All bad, but nothing compared to the elders’ most surprising observation: The sun has moved.

Past the Arctic Circle, residents lose the sun for a few months during the deep of winter, says Igloolik-based Inuit filmmaker Zacharias Kunuk. That’s normal. What’s not, however, is where the sun reappears. For his film, Inuit Knowledge and Climate Change, Kunuk interviewed elders from four communities, hundreds of kilometres apart, who all drew the same comparison to their childhood observations: Now when the sun returns in the spring, it has shifted right, across the horizon, as far as 20 km. “We were wondering what happened,” says Kunuk, “and the elders thought, ‘our world tilted off its axis.’”

The Inuit’s observations were met with some skepticism in the scientific world, admits Co-Director Ian Mauro, the only non-Inuit researcher working on Kunuk’s film and also a Canada Research Chair in Human Dimensions of Environmental Change at Mount Allison University. “In fact,” he says, “Many scientists disregarded them.” Not willing to discount the elders’ observations so easily, however, Mauro kept asking for more scientific opinions.

As it turns out, the sun hadn’t moved – but there was something wonky going on that scientists had missed. It’s called the Novaya Zemlya effect: a mirage is created on the horizon as hot atmospheric air meets the cold surface air, creating the appearance of a shift. This effect is exacerbated by climate change and thus, the sun’s altered course acts as a visible indicator. “Once the scientific community started to understand this seemingly complex story,” says Mauro, “many realized this indigenous knowledge is very effective to helping the world understand what environmental changes are taking place in the Arctic.” Let’s hope they spread the word.