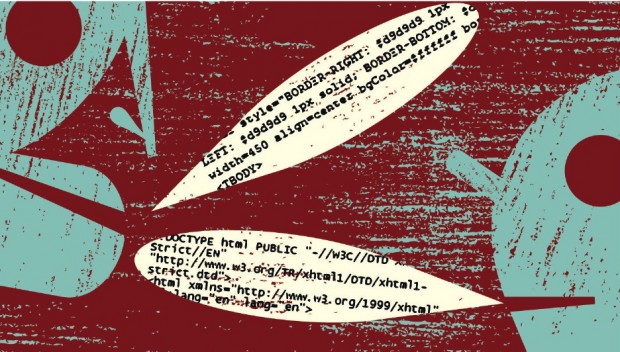 Recently, Google ruined my life. I may be exaggerating slightly, given that all they did was redesign and tweak Google Reader, one of their many services that I use daily and for which I pay nothing. But Reader, an admittedly niche product that lets you read articles from many websites in one place, has become my online home. It is the thing that organizes and makes sense of the sprawling, incoherent mass of the internet and collects it on one familiar light-blue page.

So when Google swooped in and changed things, I felt as if someone had rearranged all my furniture like some undergraduate prank. Making matters worse, the ability to share things with other Reader users was now gone—sacrificed to the company’s need to push their new social network, Google+. Not only had they redecorated the place, they had gone and redone all the wiring, too—and I was stranded in this newly alien environment that used to seem like home.

There were, however, those who had the tools and wherewithal to respond. People—people far more tech-savvy than me—used a browser plug-in called Greasemonkey to write pieces of code that magically restored the old Google Reader to me. Greasemonkey, as its auto mechanic-derived name suggests, lets you pop open the hood of your web browser and mess around, and there’s almost no end to what you can do with it.

It isn’t something just anyone can pick up, however. In order to create your own personalized experience of the web, you need to know how to code or, at the very least, wait for someone else to do it for you. And that requirement highlights a simple fact about the online world: if you aren’t literate in the languages of digital technology, your capacity to control your own experience is constrained. From the latest outrageous Facebook redesign that millions of people freak out over, to subtle tweaks to the ways in which Twitter operates, many of us—even those like me who really care about this stuff—find ourselves powerless to suit the web to our own needs.

It’s a problem that will require immensely complex solutions, primarily in how we conceive of education. If today we teach kids language and rhetoric so that one day they might pick apart politician’s speeches or learn to recognize a scam (and let’s face it, we’re not even doing that very well) we may soon have to do something analogous for programming skills. Much as “freedom of the press” was only ever true for those who owned one, protecting our freedoms online is going to require millions more people to better understand just how it works. Even those “digital natives” you hear about—the terrifying Tweeting, texting tweens—seldom have even the foggiest idea of how their favourite websites work. They can update their Facebook status without breaking stride, but could they code even a rudimentary equivalent? Vanishingly few could.

Thankfully, in the meantime there are intermediate bits of software that simplify and automate some aspects of coding so that those of us who can’t tell JavaScript from HTML can still control our digital lives in novel, unexpected ways. Take new service ifttt.com, for example. An acronym for “if this, then that”, ifttt allows you to cobble together dozens of commonly used web services to suit your own needs. Perhaps you want to know when a friend has posted a new picture on Flickr. Hook it up to ifttt and it can send you an email, a text message, even a phone call alerting you that your friend has uploaded their latest cat photo.

It isn’t quite idiot-proof. Yet it’s also a far cry from Greasemonkey and other programming-based tools because it asks you to think in terms you already know, rather than sophisticated new ones you must learn. And in a sense, this is the strange paradox of access and control on the web. On one hand, you are subject to the companies who become the default ways of connecting online, making you subject to their interests. On the other, the freer, less corporate versions of the web offer you tools to tweak how you use those services and to what end. It is—until coding literacy becomes the norm—almost akin to economics of the 1920s or the 2000s: with the tools of power centralized among a tiny few, the public is left at the mercy of those in control.

To get a sense of what is at stake, though, one need only turn to the ambivalent story of Diaspora*. In 2010, a four-person team of young programmers from New York University’s Courant Institute of Mathematical Sciences set out to build an alternative to Facebook that would address privacy worries and protect user data. Their announcement hit, however, amidst heightened concerns over Facebook’s record on privacy, and the team was thrown into a harsh spotlight, especially after a fundraising campaign suddenly netted them $200,000. Their plan was to create a Facebook with none of the drawbacks of Facebook, a task even Google can’t manage to do. Tragically, in late 2011 one of the four founders, 22 year-old Ilya Zhitomirskiy, was found dead, apparently after committing suicide.

No one knows, of course, if the pressure of trying to build an alternative to an all-powerful website contributed to Zhitomirskiy’s decision to take his life. But it’s an unsettling symbol of something—of how difficult it is for even young, brilliant programmers to take control of their and our online experience from multi-billion dollar entities. And, if truth be told, a redesign of a website is but a minor inconvenience. But the capacity of web firms to “rewire” whole swathes of our day-to-day lives is nonetheless ominous. It’s also a sign that, in future, freeing oneself from their grasp will come from seizing their tools and methods as our own, and learning how to code.