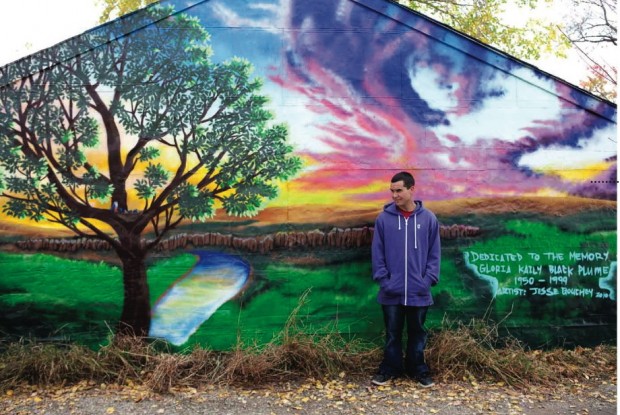 In 1999, filmmaker Xstine Cook was living in Ramsay, an inner-city working class Calgary neighbourhood, when Gloria Black Plume, an aboriginal social worker, was murdered in an alleyway five houses away from her home. Cook now lives on the property where the murder took place. She felt the need to memorialize Black Plume’s life and work.

“She was a blood mother and grandmother and her murderers walked free,” Cook said during her introduction to Spirit of the Bluebird, the short film she made with animator Jesse Gouchey in Black Plume’s honour. Cook was speaking at Toronto’s ImagineNATIVE Film & Media Arts Festival in October, where it received the best short documentary award. “Something about it grabbed hold of me and I vowed to put a mural there in her memory.”

Though originally conceived as a mural project, Cook was inspired by video artist BLU, who creates stop-motion animated films using murals, to create a film as well. “I thought it would be so much better to go beyond just the alleyway where it’s not very high traffic,” she says. “No one really knows the story, no one will discover the story there, whereas if we make a film it’s just a matter of finding the artist that can do it.”

Cook connected with Gouchey, a Cree aerosol artist, through Calgary’s Quickdraw Animation Society. Gouchey developed a storyboard of a mother bluebird and her children in a natural landscape. “I wanted something feminine,” says Gouchey. “And I wanted something that was familiar to the land too, to keep the story close to home.”

Gouchey began by painting the background scenes on a fence and garage. He then brought in a butterfly, a bluebird and a bear, photographing every image, and each time redoing the background to make it look as if the figure had never been there. He painted from July to September 2010, taking over 1,800 images. Dappled sunlight, shadows, a fence and real shrubs contribute to the short film’s unusual, ethereal effect.

Black Plume’s family contributed to Spirit of the Bluebird by attending the mural’s unveiling in October 2010. One of the speakers, Shirley Prairie Chicken, brought along her son Jonathan Tall Man, who offered his drum and voice, which became the soundtrack to the film.

When Black Plume’s daughter Kaily Bird attends screenings, such as the one in September at the Toronto International Film Festival, Cook says her presence draws attention to the epidemic of missing and murdered aboriginal women in Calgary.

“We’ll show this to non-native people and they’ll be touched,” says Cook. “But generally you show it to a native person and they cry, because they know someone that’s been murdered.”

Spirit of the Bluebird has screened at dozens of North American festivals so far, and Cook and Gouchey would like to see it go overseas. The two are working on a new short film and planning a larger community mural project.

“It’s racism and people need to see it,” says Gouchey. “This family went through hell, and this is just one case of many murders.”