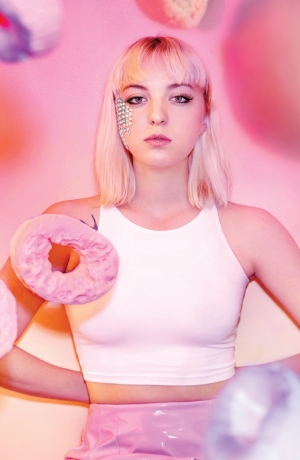 POP SINGER-SONGWRITER Lowell has recently been experiencing a recurring dream in which she’s robbing a bank, then driving away on a motorbike with her lesbian lover. Given the surreal imagery in the videos for her songs “The Bells” and “Cloud 69,” it’s easy to imagine visuals from her dream appearing in a future musical performance.

Since the September 2014 release of her album We Loved Her Dearly (released on Toronto indie label Arts & Crafts Productions, which also put out her 2014 five-song EP, I Killed Sara V.), Lowell (born Elizabeth Lowell Boland) has been in a state that she describes as both euphoric and cinematic, which is driving the creation of her new songs. “I can do anything,” she says.

At only 21 years old, the Calgary native was invited to London by a producer impressed by her demo tape. While there, she wrote songs for both herself and for pop groups like the Backstreet Boys—she received a co-writing credit for the bonus track “Take Care” on the band’s 2013 album In a World Like This. As a woman, Lowell knew she would have to work harder at getting through the door, and fought to make sure her ideas weren’t shut down. The struggle only ignited her competitive nature. While she describes herself as a control freak, she is certainly not ashamed— this kind of forceful attitude has gotten her this far.

Now, at 23, she is back in Canada, living in Toronto, and is in a position where she can choose who she works with. In a male-dominated industry, Lowell knows that it is expected for a female artist to walk in the room and have less interest, or less talent, to write songs. That said, she believes that while the bar has been set higher for women in music, more female pop artists are now propping each other up as opposed to being pitted against each other.

What sets Lowell apart is that her songs are all written with women in mind, touching on topics such as gender equality, abuse, and abortion. “There’s something more satisfying in writing to a girl,” she says. She is not inhibited when it comes to sex, or writing about it, but doesn’t do it to push the envelope: she’s just being honest. “We’re not in the 1800s, where women have to blush and guys can be dogs,” she says, admitting that people don’t always know how to receive a woman who talks openly about sex, and that others can mistake this for flirting. “Everyone I meet thinks I want to have sex with them,” she laughs. One day, she hopes, it will be commonplace in music for girls to write to girls and boys to write to boys, and it won’t be seen as so taboo.

Until then, we have Lowell writing about not worrying about the world around you, like in her song “I Love You Money,” or about sexual fantasies in “Cloud 69,” where she sings, “Oh my god, I think I need a girlfriend.”

“I like to have a purpose with my music,” Lowell says. “But sometimes I like to just write a stupid song.”