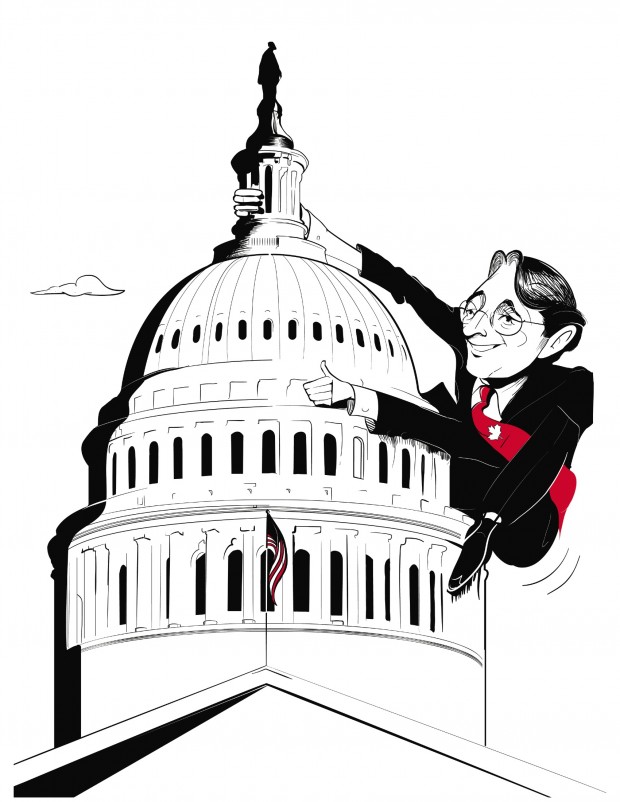 Meet the lobbyist who brought the tar sands inside the beltway. Illustration by Antony Hare

Paul Frazer is an invisible Canadian. He doesn’t live in Canada, and hasn’t for more than two decades. But he works for us, and he represents us abroad, and he holds sway over the leaders and big businesses that affect our lives. In many ways, he has power over the powerful. But here at home, this sway is often unremarked upon.

Frazer is a lobbyist in Washington, D.C., focused on representing Canadian interests below the 49th. Many regard him as our secret weapon in an ongoing political and social battle within North America. He has represented our provinces (Alberta, Ontario and Saskatchewan), and our businesses, on issues including solar energy development, trade policy and homeland security. In his work, Frazer often holds our environment—and thus our economic and social welfare—in his hands.

In his office, two blocks away from the White House, there are two engravings on the wall. One depicts the Battle of Lundy’s Lane during the War of 1812, which the Canadian side won. The other (“For balance,” Frazer notes), the Battle of Chippewa, won by the Americans in the same war. The images of that seminal conflict are what his clients are greeted with when they knock on his door. And if they’re Canadian, with a reliance on doing business in the United States, they inevitably will.

Frazer was born in Toronto and grew up in Niagara Falls, Ontario. His parents owned a summertime motel, a restaurant, and a gas station. His family border-hopped back when it was still easy—some of his aunts, uncles and cousins have married Americans.

A habitué of odd jobs, Frazer spent a summer cleaning basements and washing windows for the late Liberal MP and Pearson cabinet member Judy LaMarsh. He also worked at the Rainbow Bridge, which he credits with teaching him about the basics of migration between Canada and the United States.

Still, “It was clear to me that I would seek my professional work outside of that place,” Frazer says bluntly. In 1967, he spent the summer working at The World Expo in Montreal. At the Ontario Pavilion, the excitement soon wore off—the same old politicians needed handholding tours of the venue, and the glamour of playing host to VIPs lost its lustre as the summer wore on.

“We were fairly jaded,” says Les Monkman, Professor Emeritus at Queen’s University in Kingston, Ontario, who worked the event with Frazer. He remembers a last-minute tour that was scheduled for the end of a long day: “Everyone called out ‘Not it!’ and Paul said he would do it. At that point all we knew was that the tour was for the person who had just become Justice Minister, and his name was Pierre Trudeau. Paul had really good instincts on when to move.” After earning two degrees in political science, from McGill and Carleton universities, Frazer was encouraged by Lester B. Pearson to enter the Foreign Service. When Frazer demurred, Pearson wrote him a recommendation letter for law school instead. Frazer ended up in the Foreign Service anyway: working for Prime Minister Kim Campbell, in the Department of Foreign Affairs under Joe Clark, and was appointed ambassador to the Czech Republic by Brian Mulroney in 1992.

In 1989, Frazer had attended the wedding of Globe and Mail correspondent Paul Koring in Washington—just a short trip from where he was studying international affairs at Harvard University. There, he met Dr. Tina Alster, who was also studying at Harvard. For five years, Frazer and Alster kept up a long distance relationship between Washington (where Alster was raised), Ottawa, and Prague. “This is not a medicine town,” says Alster, of Washington. “I moved back not because of my family, but because this guy was a Canadian diplomat, and I thought one day he’ll be here in Washington.” And he was, but: “I never wanted to be posted to Washington,” says Frazer. “It wasn’t foreign enough for me, it wasn’t exotic.” In 1994, the Foreign Service posted Frazer to Washington to work at the Canadian Embassy, and he’s lived there ever since. It may not be the exotic locale he dreamed of—but the Beltway is home to plenty of unique wildlife and customs all its own.

Frazer and his colleagues like to say that he’s the only lobbyist in Washington to provide basic translation services between Canada and the United States. At the root of it, what he really does is tell Canadian companies how to effectively make Americans do what they want. Likewise, he brings Canadian business to the attention of American policymakers.

As our business interests are so inextricably linked, Frazer’s clients come to him to ensure policy decisions made in Washington don’t lead to turmoil at home. On his part, Frazer continually finds himself reminding Americans that we live in a linked economy.

After the mid-term elections in November 2010, many Canadian businesses were prepared for an upheaval when the Republicans took majority in the House of Representatives. Frazer asked them to cool down, reminding them that the change meant little in terms of legislation.

“You can’t catch all those things that go pop,” he says, with some resignation. “Some of them make more noise than anything else, and some are more serious than others.” He is reluctant to spill client names. Along with the Province of Alberta, Frazer mentions a company in Nova Scotia that developed an enhanced, environmentally friendly process to dispose of toxic liquid. He’s also provided advice to the Government of Ontario regarding American interests in green energy.

The Lobbying Disclosure Act database maintains a list of all lobbying actions filed with the House of Representatives. Frazer is listed in their database dating back to 2001 as having represented clients including the Canada International Pharmacy Association, Scotiabank advisor Adrian Tauro, and the Certified General Accountants of Ontario.

Frazer’s job, simply, was to monitor the American government to prevent another “Section 526.” The Section 526 provision to the U.S. Energy Independence and Security Act of 2007 forbids the U.S. government from buying the type of high-carbon fuels produced in Alberta’s oil sands. Canadian Embassy officials lobbied hard to weaken the language in the bill, and it shook the province’s business and politics to its core.

As part of his contract, Frazer brought Albertan officials to Washington—something not all clients do. “Frankly, it was just so that they could put a human face on some of this stuff”—“stuff” in this case being things like whole flocks of dead birds, destroyed wetlands, toxic spills, and ravaged landscapes.

Frazer has been fending off criticisms about representing Alberta ever since. At an alumni event in Washington this fall, grads chastised Frazer for his decision to take the province on as a client. “People raised their eyebrows and thought, ‘How could you represent Alberta on oil sands?”,” he says. “But I say, give me something to work with. We have a tap that will turn oil or gas on and off, but the tap for solar and wind is only giving a tiny bit right now.” His contract with the province ended last March and with a new government in Edmonton, Frazer is off the oil sands beat—for now.

Lobbying is more often than not considered ethically dubious, since there are lobbyists for practically every profession from teachers to cigarette companies. But University of British Columbia economics professor Matilde Bombardini says they’re often caught in a game of shoot the messenger.

“They’re the least trusted profession in the U.S., and yes, there are some that do illegal things,” she says. “But most operate within the boundaries. And they often produce information that is useful for policymakers.” John Chenier, former editor and publisher of the Ottawa-based publication The Lobby Monitor, says that lobbying is simply, “Games within games, wheels within wheels.” Of the ethics of lobbying on behalf of a highly controversial project like the oil sands, “I go back and forth,” says Chenier.

“One might judge someone lobbying for the tar sands as arguing on the side of the devils, rather than on the side of the angels. But many people in Alberta would disagree.” According to Chenier, the Government of Canada is this country’s largest spender on lobbying, and it has spent over $100 million in the U.S. and Europe lobbying other governments on environmental issues like softwood lumber exports and the Northern seal hunt.

But while we spend millions abroad, there are no Americans living in Ottawa full-time (as Frazer does in Washington), for the express purpose of lobbying Parliament Hill on American interests. Their embassy does most of the work in Ottawa, simply because our government is quick to consider U.S. interests without needing to be prompted. Decades of ever-tighter economic integration—from the Auto Pact to NAFTA to the proposed Great Lakes Partnership Council—means Canadian governments have no choice but to listen when American businesses speak. In the end it’s an American decision that will determine how the oil sands, and thus a considerable chunk of Canada’s economy, will proceed. “The decision in Washington on the Keystone XL pipeline could very well decide the fate of the tar sands,” says Chenier. “If you’re against it, it’s very important. If you’re for it, it’s very important. They could decide the development of northern Alberta, and in the process the environmental health of the world.”

“Americans don’t think of Canadians as foreign,” Frazer says. “You can take that one way or another. My perspective is to say run with it. Make it work for us.” He argues that Canada needs to be more bullish, in the American style. “Go in. Stand straight. Say your piece.”

David Biette, director of the Canada Institute at the Woodrow Wilson International Center for Scholars (where Frazer is a co-chair on the Institute’s advisory board), remembers a time when a client didn’t follow Frazer’s exact instructions on how to send thank-you cards after they returned to Canada. The next time they visited Washington, they were greeted with a frosty reception. “You can’t really say in Washington, ‘This is great for Canada’,” Biette says. “People look at you and reply, ‘I have a meeting…’ or something.”

That might be changing, though. After the federal election in May 2011, the Wilson Center held a discussion on what a Conservative majority means for Canada-U.S. relations. The house was packed, with an overflow crowd that couldn’t fit in the room.

“I wish I could be back in 1812 right now,” says Frazer, back in his office in Washington. “Or maybe 1814, and ask those Canadians what they think. I think they’d say we as Canadians did something nobody thought we could do.” Earlier this fall, it was announced that the Harper Conservatives had created an $11.5 million fund to recognize the history surrounding the War of 1812. The official commemoration will actually be a four-year process, culminating in 2015. New plaques will be mounted, monuments polished, battle re-enactments held, and plays and musical performances scheduled. In Canada, at least, the bicentennial is being trumpeted as a military victory that forged the nation that would eventually become Canada.

In the U.S., the conflict barely registers. “It doesn’t really have to do with whether it helped form your identity,” Biette explains. “It’s that it’s still part of your identity in 2012. That’s not so much here. In fact, I don’t believe I’ve heard anything about a commemoration of the War of 1812—and that’s when we got the Star-Spangled Banner.”

It’s divides like these that Paul Frazer has made a career bridging, explaining their foreign northern neighbours to America’s political class. Whether you hate or love his line of work, he is among the most important, and poorly understood, figures linking our two countries. For better or worse, a lot depends on Paul Frazer—our man in Washington.