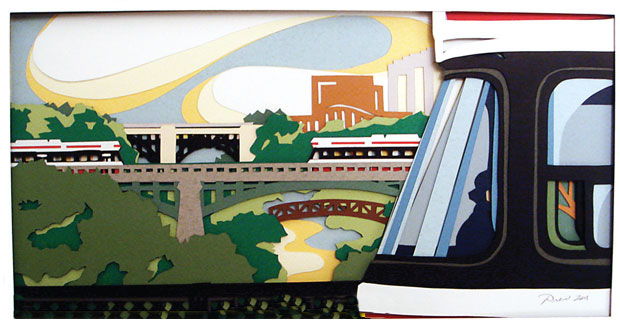 A compact card unfolds into a three-dimensional paper scene: a polar bear atop an ice drift looking to the murky depths below, surrounded by the brilliant aurora borealis. Drew Nelson’s origami creations, like the man himself, are a harmonious, detailed and delicate reflection of his world and what he wants to contribute to it.

Nelson is the creative force behind Kinetic Energy Paper Oddities, a maker of pop-up cards, stationery, dioramas, and other paperengineering curiosities. KEPO has been producing meticulously designed cards made out of biodegradable recycled paper for four years now, but Nelson has been a paper lover since childhood.

“I like the fact that you can take a flat sheet of paper and turn it into something three-dimensional,” he says. After graduating from York University’s fine arts program, Nelson headed to Japan where he travelled and worked to pay off school debts. In his spare time he studied the Japanese paper-folding arts of origami and kirigami. After returning to Canada, Nelson aimed to bring the same level of craft and technical rigor he saw in Japan to his work.

Origami (the word comes from the Japanese for oru, to fold, and kami, paper) is hundreds of years old. There is only one material requirement, paper, usually six inches square, precisely folded to look like animals, plants, buildings, and more.

The “kinetic” in KEPO refers to the transfer of energy—from the card maker to the giver to the receiver. Nelson strives for balance and harmony in his work, in his meditation practice, and in the world around him. “I enjoy making cards because it’s peaceful and meditative,” he says. “I love watching somebody open a card and see the buyer’s face light up. I’m passing something on to them,” and that energy is then passed on to the recipient.

While card making is often regarded as a disposable art form, Nelson likes it because cards are increasingly special in a culture dominated by electronic communication. “We’re losing the box under the bed with photos and a card from your grandmother. The more technological and paperless we become, there’s going to be the desire for something tactile,” he says.

Next Nelson is preparing to showcase, in collaboration with Toronto’s Everyone is an Artist collective, a project he’s been nursing for some time: an eight-piece scenic diorama of Toronto’s iconic streetcars. “I love that streak of red that goes through the city,” he says. “I’ve always loved these trains.” He was planning to make the streetcar project of pop-up souvenir cards, but opted for a showcase instead. “The past couple of years I have been designing the business so it can reflect what it is I want to do, without losing the integrity of my work. I’m learning to say no to things that will steer me off track.” He won’t produce work for companies that are environmentally destructive or have poor employment practices, for instance.

In this slick, modern iWorld, Nelson infuses an ancient craft and a sense of community into his remarkable paper creations: “I want to produce a product that gets kept because it’s worthwhile, because time has been put into it.”