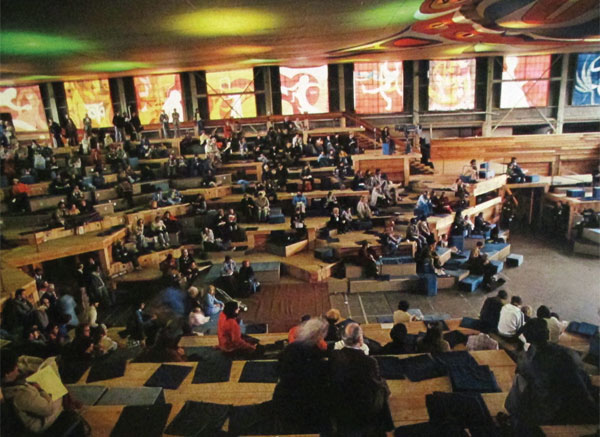 Interior of one of the Habitat ’76 hangars. Image courtesy Lindsay Brown.

Walk around Vancouver’s Jericho Beach in 2011 and you’ll see some odd architecture: an empty concrete wharf, a welded steel railing that overlooks English Bay, a strange rail embedded beneath the sailing club. These are all that is left of a complex of five gigantic aircraft hangars that was home to an international conference 35 years ago.

Lindsay Brown, a textile designer and board president of Vancouver’s Or Gallery, is working to unearth a forgotten piece of Vancouver’s history: Habitat ’76, a United Nations-sponsored conference that brought together figures like Buckminster Fuller, Margaret Mead, and Mother Teresa, to discuss and explore human living conditions and social justice. She is gathering information towards publishing a book.

An adjunct to the UN Habitat Conference on Human Settlements, the Habitat Forum was infused with a distinctly mid-’70s brand of optimism and utopianism. The five huge seaplane hangars, left over from the 1930s, were converted into theatres, halls and restaurants for the thousands of people who attended. The theatre, styled to look like a First Nations longhouse, had a Bill Reid mural.

Brown, a thirteen-year-old girl at the time, visited the Habitat forum and calls it a life-changing experience. “It had a kind of a carnival atmosphere. It had a less controlled atmosphere than the city generally had. People call it ‘No Fun City’ now. When you’re thirteen, you don’t exactly know what’s going on, but it had that feeling of ideas and experimentation as well as fun. It was so beautiful.” 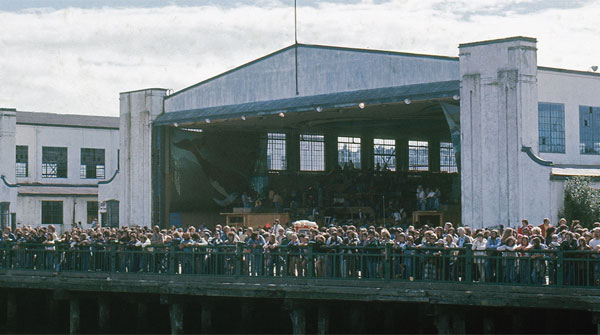 Exterior of one of the Habitat ’76 hangars. Image courtesy Lindsay Brown.

She was impressed with the ferment of artistic and political ideas and creativity at Habitat, in contrast to the staid conservatism she experienced in the rest of the city. “You did get the sense you were in a global event rather than the sort of parochial Vancouver I’d been used to.”

Years later, Brown never forgot about Habitat. She would Google it now and then, but was often frustrated that little or nothing turned up. Habitat seemed to have been forgotten. In 2009, she decided that if nobody else would write a book about it, she would.

Brown managed to track down Al Clapp, Habitat’s organizer and a prominent broadcaster. ““I said, ‘Hi, I’m a child of Habitat. I want to write about it. Can we talk?’ He said, ‘Sure. I’m in Victoria. Come on over.’” Brown visited Clapp, who loaned her his archive of photos and other material. “That’s when I knew there was a book in it.”

Brown says that, unlike Expo ’86, Habitat ’76 was deliberately buried by Vancouver’s city government. “It’s very hard to keep a history alive when you have absolutely zero public, official recognition of it. I think it was deliberately suppressed.” The aircraft hangars were demolished and the 35th anniversary came and went with little fanfare.

More than just nostalgia, Brown believes that Habitat’s ideals are increasingly relevant today with the renewed focus on urban planning. “One of the interesting things about Habitat is that it thought about those things, what is actually livable at a human level? What should neighbourhoods and cities be like?”