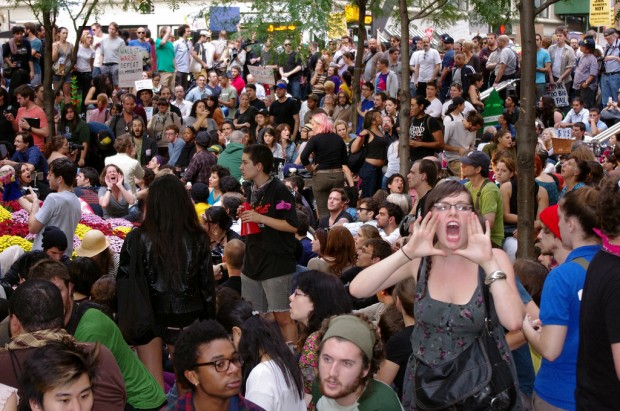 [Note: this editorial appears in the November-December 2011 edition of This Magazine, which will be on newsstands and in subscribers’ mailboxes in early November.]

Looking back on autumn 2011, it seems increasingly clear that the movement known as “Occupy Wall Street” will be viewed as a genuinely important historical moment for the West. The idea, first floated by the contemporary masters of agitprop Adbusters in July, quickly developed a life of its own, attracting thousands of people to a makeshift encampment in New York’s Liberty Square. They came for a variety of reasons, but their slogan was, and is, a simple and powerful fact: “We are the 99 percent.” As in: regardless of political affiliation, personal attributes, or occupation (or lack thereof), we are united by our opposition to the predatory economic behaviour of the top-earning one percent.

The “Occupy” meme spread quickly, with new demonstrations popping up across the United States and Canada. The language explicitly drew parallels with the Arab Spring revolutions still roiling the Middle East; the selection of Liberty Square, an echo of Egypt’s Tahrir, or Liberation Square, was no accident. (It should be noted that some fairly objected to the militarist and colonialist overtones of “occupying” anything.) This being the internet age, variants and jokes swarmed around the event too, with “Occupy Sesame Street” casting the Muppets as revolutionaries, and “Occupy Occupy Wall Street” satirically imagining hedge fund managers and investment bankers sitting in on the sit-in.

Many observers, particularly reporters from larger media outlets, were either openly scornful or simply missed the point. They got their footage of some “anarchists”—one of the laziest catchalls in contemporary journalism—looking angry or shouting slogans, and spoke in ominous tones about arrests and scuffles with the police, frequently omitting the fact that the police were the aggressors.

In fairness, Occupy Wall Street, for all its catchy slogans, actually is hard to summarize in a 60-second slot on the evening news, and thank goodness. People showed up for all kinds of reasons: jobs lost to globalization, homes lost to foreclosure, health lost to the U.S.’s senseless farce of a health care system (here in Canada, where unemployment is lower, banks more regulated, and health care still mostly public, the list of grievances was slightly different but still passionately felt). The point was never to hammer out a unified, focus-grouped electoral platform; it was to finally articulate a widespread anger and dissatisfaction with the status quo. Reporters asked “Why are you here?” as if they expected a camera-ready soundbite. But many of us asked, “What took you so long?”

The latest economic crisis had its roots in the investment bank collapses of 2008, and the last three years or so have inflicted a series of indignities on millions of people around the world. Most of them bore their burdens in silence, working- and middle-class citizens feeling shame for suffering the effects of an economic calamity they didn’t cause. Crucially, they are the constituency who are now shrugging off that humiliation and focusing their anger on the ones who are truly to blame. Critiques of globalized capitalism are nothing new; thousands of previously unradicalized protesters in the street certainly is. They’re mad as hell—you know the rest. What will come of it, no one can say conclusively. But naming the problem is the first step, and the Occupy protests have done an admirable and necessary job.