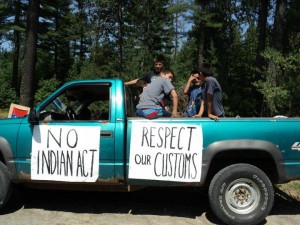 Protesters at Barriere Lake turned away election officers from the Indian Affairs Department in July. Photo courtesy Defenders of the Land.

The path forward, if the futures of First Nations and the rest of Canada are to reconcile, begins with two steps. Repeal the Indian Act, and abolish the department that delivers it. Bluntly put, the legislation that governs how status Indians are treated—and defines who holds that status—was racist and wrong in its conception 135 years ago, and has been in its implementation ever since.

Adopted explicitly for the purpose of assimilating Indians and eliminating “the Indian problem,” the devastation wrought against First Nations is today undeniable. Moreover, the social disharmony and economic cost to Canada as a whole remain ongoing challenges of this legacy. Change is desperately needed, but as that change will mold the future relationship between First Nations and Canada, it is essential that we get it right this time. And getting it right won’t be easy.

In a speech at July’s Assembly of First Nations, National Chief Shawn A-in-chut Atleo rekindled a debate that has been going on for quite some time over how to replace the Indian Act and the department that delivers it. When the Government of Canada floated the notion of repealing the Act in its infamous 1969 White Paper, it was surprised by a strong and effective negative response from the very people who suffered most from the legislation. Trudeau and his Indian Affairs Minister, Jean Chrétien, thought that simply wiping out any differentiation between Indians and other Canadians would bring equality and be welcomed by everyone. But for First Nations, that approach to the repeal of the Act and abolition of the department is incomplete.

As First Nations leader Harold Cardinal said at the time:

We do not want the Indian Act retained because it is a good piece of legislation. It isn’t. It is discriminatory from start to finish … but we would rather continue to live in bondage under the inequitable Indian Act than surrender our sacred rights. Any time the government wants to honour its obligations to us we are more than ready to devise new Indian legislation.

Therein lies the debate. Formal equality—undifferentiated treatment under the law— has the appeal of simplicity and superficial fairness. That’s why some people support repeal today: They like the idea of ending “special rights.” But equality under the law starting today means that the inequity enforced since before Canada was a country remains unaddressed. In particular, the laws under which everyone would theoretically be equal were created by and for those who have perpetrated that inequity, without regard to the rights and interests of First Nations. This approach simply continues the policy of assimilation.

What National Chief Atleo and others are proposing is something more complex and nuanced than wiping out all historic and legal distinctions in one fell swoop. They are suggesting that the rights First Nations hold in law—treaty and aboriginal rights recognized both under international law and under section 35 of the Constitution Act of 1982—be respected. From this perspective, upholding legal difference is, in fact, essential to equality. The failure to respect historic legal rights and interests would only continue the injustice.

Atleo is also suggesting that a responsible and methodical approach be taken toward the ultimate objective of repeal and abolition. This includes rapidly increasing the number of completed self-government agreements and accelerating the conclusion of the claims processes, vesting responsibility and accountability with First Nations governments and facilitating economic, social and political progress. On the bureaucratic side, it means creating two entities in the federal government to replace the 34 that currently administer aboriginal programs and services. One would occupy itself with the intergovernmental relationship between Canada and First Nations, establishing the foundation for reconciliation of the rights and interests of all. The other entity would continue in a diminishing role as service provider for those First Nation communities that continue to move toward selfgovernance, carefully winding down the traditionally paternalistic role played by the federal bureaucracy in Indian country.

This proposal is neither radical nor new. It is consistent with recommendations in a 1983 submission from a House of Commons committee known as the Penner Report and the report of the Royal Commission on Aboriginal Peoples released in 1996. Unfortunately, whether for practical or ideological reasons, no government has been willing to act on the idea until now. Interestingly, this proposal was part of the aboriginal issues platform of the New Democratic Party in the most recent federal election, but it is not popular within the Harper government. In response to the National Chief’s speech, a spokesperson for Minister John Duncan of Aboriginal Affairs and Northern Development Canada dismissively responded, “Our government is strongly committed to addressing challenges within the Indian Act” (emphasis added).

Ironically, in June of 2009, Prime Minister Harper apologized for Canada’s residential schools policy by saying, “Today, we recognize that this policy of assimilation was wrong, has caused great harm, and has no place in our country.” But more than two years later, his government insists on retaining the central vehicle for assimilation—the Indian Act itself—albeit with some tinkering around the edges. It wants to keep the department as it is, as though having renamed it from “Indian and Northern Affairs Canada” to “Aboriginal Affairs and Northern Development Canada” resolved the dysfunction there. In short, the Prime Minister either misunderstood the lessons he claimed to have learned in his apology, or he never really meant what he said.

Getting it right won’t be easy, but it is worth the trouble.

Daniel Wilson is a freelance writer and consultant on human rights and aboriginal policy. He is a former diplomat and advisor to the Assembly of First Nations.