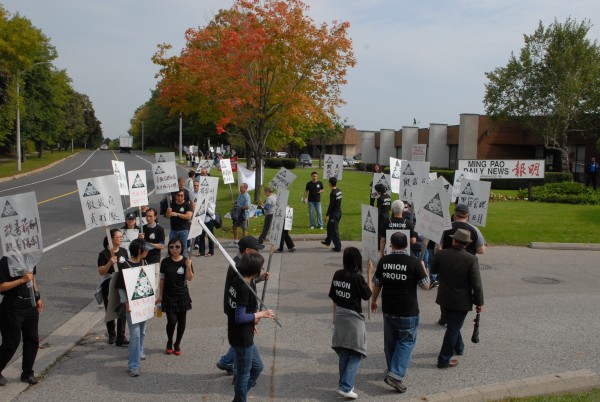 Ming Pao workers picketing outside their workplace. The paper’s 140 workers walked off the job last Wed. Sept. 21, in an effort to win a first contract- and the strike has been disappointingly under-reported in Canadian media. Photo from the Ming Pao union.

“Stay strong. Fight for justice, fight for our dignity, fight together.”

The above is a message from Simon Sung to his fellow employees at Ming Pao, a Chinese-language daily newspaper in Toronto. The paper’s 140 employees have been on strike for nearly a week, yet no English-language media outlet that we’ve been able to find has reported on it so far. (Update, 5:03 pm: via commenter Natalie below, the strike came up on CBC’s Metro Morning today.)

Contract talks have happened on and off since January 2011, but the paper still does not have its first contract. Paul Morse, president of the Southern Ontario Newsmedia Guild, says that key issues on the table for Ming Pao are wages, sales commission, security guarantees, reasonable work hours, and minimum vacation requirements.

Sung says that Sing Tao Daily employees have higher wages, less work hours, and fairer vacation time. But for Sung, the biggest issue at Ming Pao is job security. He says that when the Ming Pao employees formed the union, more than 10 employees were laid off — mostly union supporters or union activists.

A contract, Sung said, would give Ming Pao’s employers less excuses to lay people off—which he described as “a target to minimize the power of the union.”

Morse, along with Sung, hopes that the employers will come back to the bargaining table soon in order to negotiate a reasonable contract for Ming Pao employees.

The fact that other media outlets have either taken no notice of the strike, or noticed but decided not to cover it, has disappointing implications for the city’s rhetoric about diversity. At the very least, it points to the erosion of labour reporting at the big papers.

“The Ming Pao workers are looking for standards things that working people in Ontario have achieved over the years,” said Morse. “They’re no different than anybody else in Ontario in terms of needing to make a living, needing to work, and appropriate standards of work. So we hope the company realizes that it’s to their and our advantage to treat their workers fairly. There’s nothing that the Ming Pao employees are asking that’s outside the realm of normalcy.”