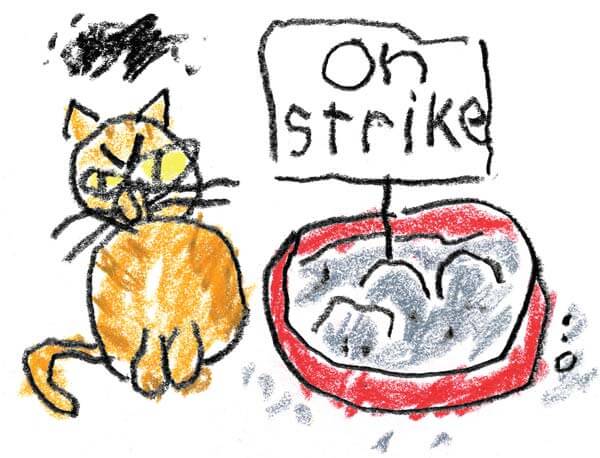 Solidarity forever. Or until the litterbox is full. Illustration by David Donald.

As I write this, Toronto is several weeks’ deep into a civic workers’ strike. The issues on both sides are complex, and neither side, the city nor the union, have behaved with grace or consideration. Swimming pools are closed, city-run daycares are closed, you can’t get a permit of any sort, and nobody is picking up the trash. As someone who hates to swim, has no children, and would need to own a home before I could consider renovating it, the strike means only one thing to me—how long can I get away with not cleaning my cat Poutine’s litterbox? How many little mountains of clumped clay does Poutine have to stumble over before I officially become an animal abuser?

Like most apathetic Torontonians, I figure ignoring the garbage problem is the best solution (actually, sneaking out in the middle of the night and cramming the cat crap into an overflowing street bin is the best solution — illegal, yes, but what are they going to do, get Poutine’s DNA from a turd?). And, like most no-way-would-I-do-that-job Torontonians, I am not unsympathetic toward the “garbage guys” union—at least not until their needs collide with mine.

Like most events in our publicity-mad era, the stalemate between the city and outside workers is really a battle over good versus less-good PR. The clever people signing the cheques at Toronto City Hall well know that the public employees’ union can’t muster the same sentimental attachment to waste management as their brother unions can to policing or firefighting. Firefighters have cute dogs, for god’s sake! And cops are sexy. Garbage guys have no adorable mascots and wear baggy uniforms that are about as sexy as wet tarps.

Nobody grows up wanting to be a garbage collector. No heroic texts sing of triumphs in trash removal, and there are no long-running television dramas examining the soul-destruction endured by people who empty recycling bins. No one has ever run into a burning building to save bundles of old newspapers. Thus, the city can hold out as long as it likes, because there is no glamour in rubbish.

I will admit to having impure thoughts about my local litter wranglers of late, and I am not talking about wondering what’s under their oilcloths. The first week into the strike, I caught myself thinking such unprogressive, uncharitable thoughts as, “I have never been in a union of any kind, so I wouldn’t know a banked sick day from a snow day,” or, “I went to school for six years, and I still make less than my local scullery lout, the guy who always chucks my empty green bin in the middle of the sidewalk, blocking pedestrians, seniors in walkers, large dogs, and children on trikes.” Shame, you dapple my rainbow.

In week two, I began to question my previously automatic support of unionized labour. Specifically, why do people behave like it’s 1932 whenever they go on strike? As if the diverse world of work today — wherein few people share the same mix of labour, pay, and benefits agreements — can be reduced, when it’s metaphorically convenient for both parties, to “bosses versus workers.” I’ve been my own boss my entire adult life. Who do I get to sing antiquated folk chants to? Where do I file a grievance when my house smells like the dumpster behind the Humane Society?

Now in week three, I don’t care anymore who’s right or who’s a greedy, overprivileged layabout (although I would dearly love to see my local councillor, a do-nothing in the sunniest of times, heaving bags of fetid refuse into the maw of a maggot-encrusted truck, preferably while being pecked by seagulls). I just want to breathe deeply again.

I’m tired of taping aloe-scented antiseptic wipes across the bridge of my nose when I run past the cat’s “go (and go, and go) zone,” through the increasingly dense, bluish mist surrounding the feline rest stop. I’m fed up with feeling surrounded by my own bad habits, by pizza boxes and sour wine bottles, fly-specked candy wrappers and spore-spawning coffee grounds. I’m sick of the dust, the entombing dust, and the raw, sweaty, eye-watering acidity in the air, the farty tang of it all.

If I wanted to wallow in filth, I’d pick up trash for a living.