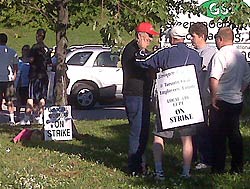 [Disclosure: CUPE is a This Magazine advertiser]

Toronto is now about half a day into a municipal workers’ strike, and the usual braying chorus has sprung up on radio, television, and the op-ed pages, alternately condemning or defending the strike action. Generally, there are three viewpoints expressed:

Already the sentiment that seemed to be gaining media traction this morning was “In this Post-Global-Recession World, shouldn’t CUPE just suck it up and accept that the benefits they negotiated are no longer viable, and they should just give them up now so we can all get on with our lives?” It’s one of those arguments that’s appealing to centrist media, because they get to slap the “Irrelevant!” sticker on the union, without being anti-union per se. It’s just that this strike crosses, you know, some arbitrary threshold of acceptability, and look, all these easily agitated people who like to call talk radio shows are worked up about it! Well, sorry, that’s not how it works. It’s not CUPE’s job to roll over and die every time management has a cashflow problem. The union exists to preserve existing benefits, negotiate for new ones, and stand up for their members’ job rights. That’s their job—they’re not running for Miss Congeniality.

And, despite their grumbling, many Canadians believe that collective bargaining and the right to strike are not negotiable based on the convenience or inconvenience of this particular strike, or the next one. The benefits of the union movement—even for those who don’t belong to one—outweigh the occasional frustrations.

I linked to this essay, “In Search of Solidarity” by Christopher Hayes on Twitter last week, but it’s stuck with me over the weekend and seemed particularly apt today. It’s worth reading in full, but here’s a great excerpt, related to the New York transit strike in 2005. Keep this in mind in the next few days.

Among liberals–people who loathe Bush, oppose the war, favor national healthcare—there’s an ambivalence about the strikers’ demands: Who gets to retire at 55 with a half-salary pension? The New York Times editorial page calls the strike “unnecessary,” the union’s account of negotiations “ridiculous,” and bellows that [the union] “should not have the ability to hold the city hostage.”

But despite the near-unanimous condemnation by the city’s mandarins and negative round-the-clock coverage, New Yorkers, astonishingly, support the strikers.

I get an inkling of this when I walk past an MTA bus depot in East Harlem on the strike’s second day. Instead of a riotous mob shouting insults, cars honk approval as they zip past the picketers.

Polls commissioned by local news outlets bear this out, though you’d hardly know it from the coverage. One, commissioned by a local ABC affiliate and conducted by Survey USA on the first day of the strike, asked the question: “In the transit strike…whose side are you on?” Fifty-two percent of respondents said the union. Forty percent said the MTA. A poll from local radio station WWRL found that 71 percent of respondents blamed the MTA for the strike and 14 percent blamed the union. A poll by local cable channel NY1 found a majority of New Yorkers thought the union’s demands “fair.”

The real story of the strike is not the epic hassle it created. It is the fact that despite universal condemnation from opinion makers, millions of New Yorkers were in solidarity with the strikers.