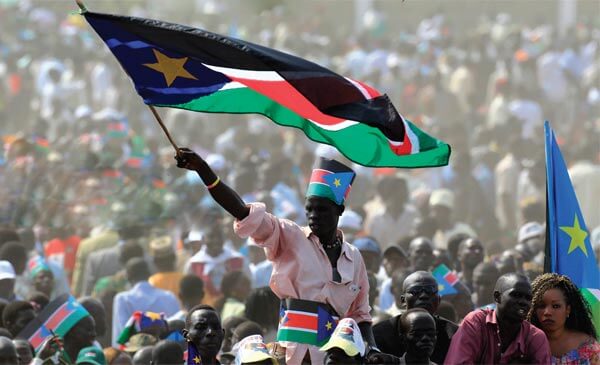 In many ways, this tiny classroom was just like any other: rows of young students looking up at their teacher, the day’s lesson displayed on the dusty chalkboard overhead. But this day was not about grammar or arithmetic. It was about the long fight for freedom. In South Sudan, it is rarely about anything else.

I watched as a small boy walked to the front of the room. “This is the Leer Primary School Drama Club,” he announced, unexpectedly firm for a child. “I hope you will enjoy.”

Then the teacher took centre stage, behind him, a chalkboard cluttered with notes on the local harvest, Jesus, and salvation. In his hand he grasped the long wooden stick that would act as his conductor’s wand. He thrust it upward and the children rose at its command. The call and answer was about to begin.

An invisible border split the class, forming a group of students on either side. The teacher pointed his wand to one section. “Yes!” the children cried out. Swung now to the other, his wand signalled the reply. “Yes for what?” the students boomed. This time in unison, each child rang the final call. “Yes for separation! Yes for the independence of Southern Sudan!”

The mood was hopeful, but solemn. The children seemed so young and I wondered how much they could possibly understand about the words they dutifully recited. To see a primary classroom charged with nationalist emotion was jarring at first, but in context, not surprising. In late 2010, the same sentiment permeated the entire region, spreading far into remote villages like this one, touching young and old alike. It was a sentiment that had been building for decades.

Starting in 1983, civil war between the central government and the southern-based Sudan People’s Liberation Army (SPLA) persisted for more than 20 years, resulting in nearly 2 million deaths and one of the largest and most gruelling displacements of refugees imaginable. A peace agreement ended the war in 2005, but six years later, as its terms came to a close, the South remained one of the most undeveloped regions in the world, and relations with the North had not improved.

Though the roots of Sudan’s problems are complex, for Southerners the solution became clear—secession from the North, independence, and freedom. In hopes of growing up in peace, these children sang for a nation of their own.

On July 9, 2011, that nation arrived. Following a referendum on January 9, 2011, in which a reported 99 percent of South Sudanese citizens voted for their independence, the Republic of South Sudan was born. Celebrations in the new nation’s capital of Juba lasted for days.

Still, the trials are not over for North or South Sudan. Leading up to the split, discourse in the South left room for little more than a simple separatist cry—a resounding Yes for independence. Now, unresolved issues of oil-sharing, citizenship, and border demarcation loom while the Northern government has started a new campaign of violence in its state of Southern Kordofan. The Republic of South Sudan may have gained the independence for which its children sang, but for North and South Sudanese, separation does not yet mean peace.