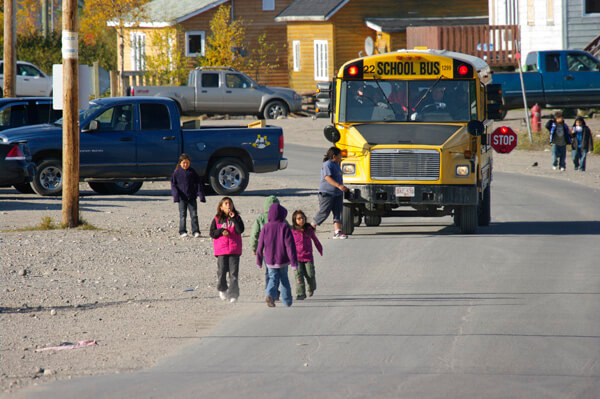 A new school in Sheshatshiu, Labrador, has revolutionized teaching and re-energized the whole town. Photo courtesy Innu Nation via Flickr.

Many Canadians associate Sheshatshiu with images of children sniffing gas from paper bags. The troubled central Labrador Innu community received nationwide attention in the ’90s as a place in crisis. Now, years later, with the opening of the new Sheshatshiu Innu School, members are working to shed the reserve’s negative image and turn life around for its children.

The popular new $14-million facility was jointly funded by Indian and Northern Affairs Canada and the provincial government. It easily outclasses the old Peenamin Mckenzie School, a run-down, graffiti-covered building with wire-protected windows, boycotted by students and parents in the fall of 2007 because of mould and asbestos problems.

The new eagle-shaped building houses 383 students from kindergarten to Grade 12, dedicating one “wing” to the high school and the other to the elementary school. The multi-million-dollar funding shows: the school is equipped with 110 laptop computers; digital chalkboards adorn every classroom; and the gym floor is identical to the one played on by the Toronto Raptors.

Much credit is owed to students themselves, who lobbied hard for changes, making presentations to both federal and provincial governments after the 2007 boycott. “Students knew that education needed to be brought up to a better standard,” says Qupee.

The Innu have also formed their own school board called the Mamu Tshishkutamashutau Innu Education with the motto: “We care about the education of our children.” The board added more Innu cultural content to the curriculum, reintegrating traditional ways into everyday school life.

School principal Clarence Davis says the new Innu focus has made students—and the whole community—more actively involved in this school. It now holds several free classes in the evenings and a student council was elected for the first time last year. Elders are also playing an increased role in the curriculum in new and creative ways.

In October, an elder took a Grade 9 class for a week-long walk and camp-out on traditional Innu land. During the days the group explored, talked, and hunted small game. During evenings, lessons were given on astrology and biology. “It’s about the philosophy of teaching,” says Davis. “This is an Innu School. I can’t stress that enough.”