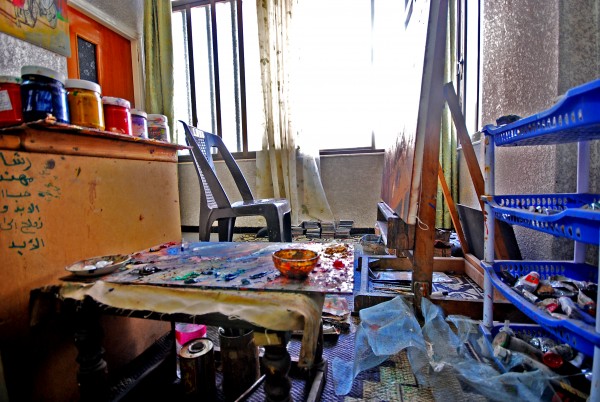 Bassam and Zahra's studio in Damascus.

In one room of their tiny apartment in a suburb of Damascus, Iraqi artists Bassam and Zahra have set up their studio. It has all the necessary trappings scattered around in a colourful mess: sketches, wooden easels, tubes of pigment, paint brushes soaking in plastic buckets filled with water.

The couple are refugees who fled to Syria to escape the war in Iraq. They scrape together a living by selling their paintings to tourists. It’s much cheaper to live in Damascus than it is in Baghdad, but even so, they can’t get by without occasional gifts from relatives to make ends meet.

When the war broke out in Iraq in 2003 and work was hard to come by, Bassam began painting portraits for American soldiers. After his neighbourhood was occupied by the Mahdi Army, a Shia militia, he quickly became a suspect. A friend of Bassam’s who ran a bootleg liquor store was killed. After his death, Bassam says life in Baghdad became “like being in a movie, no life and no feeling.” Terrified of the violence, Zahra did not set foot outside of their home for three months. 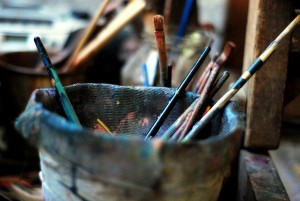 As the situation in Baghdad deteriorated, educated, middle-class individuals and students—Zahra’s father, now 75, graduated from Oxford University and was a successful engineer; Bassam’s mother was an accountant—were in danger, either of kidnapping for ransom or of being perceived as collaborating with the American military. So, in 2006, like many other Iraqis, Bassam and Zahra made the difficult decision to leave their families and escape across the border to Syria. Bassam describes a huge sense of relief when they passed into Syrian territory, like he could finally breathe again.

Neither of them have been back to Baghdad since 2006— nor do they want to return. The couple says life before the war was like being “choked.” Saddam Hussein’s authoritarian regime was oppressive, but stable. Today, sectarian violence is rampant, and neither Zahra nor Bassam believes the situation in Baghdad will improve any time soon. 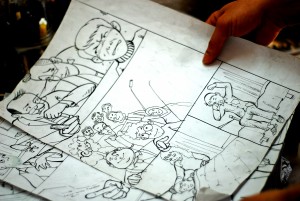 As refugees in Damascus, they live in perpetual fear of being kicked out of the country and having to return to Iraq. Both of them continue to harbour the dreams they shared when they met at art college: Bassam hopes to have an exhibition of his paintings and perfect his work as a comic artist; Zahra, who laughs easily and is seldom seen out of her Converse sneakers, smiles at the thought of having children. But both are too worried about deportation to consider a family right now.

A phone call from the UNHCR with the promise of resettlement to a Western country is their best chance at finding a normal, stable life. However, they have no illusions that it will happen soon—Syria is home to an estimated 1.2 million Iraqi refugees just like them.