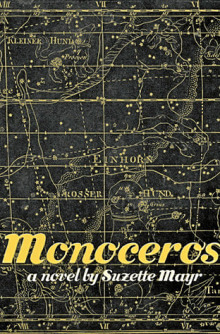 After Patrick Furey, a heartbroken and bullied gay student, hangs himself in his bedroom, there is no minute of silence, no special assembly. Instead, his school’s closeted principal forbids staff to share any information, fearing a teen suicide would damage the school’s reputation and possibly spawn copycats. Furey’s death may happen in the first few pages of Suzette Mayr’s fourth novel, Monoceros, but it echoes from cover to cover. His empty desk forces students and staff to contemplate the finality of his death, and the fact that they hardly knew the troubled student at all.

Suzette Mayr skilfully crafts each chapter from the perspective of one member of her colourful, but flawed, cast of characters. Furey’s secret boyfriend, Ginger, suppresses his grief to keep their relationship hidden, especially from his jealous girlfriend, Petra, who had scrawled “u r a fag” on Furey’s locker before he died. There is also Faraday, Furey’s unicorn-obsessed classmate, who wishes she had done something nice for Furey before he died, like written him a note saying “Hi” or donated her virginity to him.

In a tragedy laced with humour, Mayr engages readers with her meticulous attention to detail, providing vivid descriptions of not only her characters, but also the heavy emotions—grief, confusion, aching—churning inside them. Monoceros may spark a visceral reaction in some readers, especially as the unnerving words “faggot” and “homo” roll off characters’ tongues with teenage ease. But mostly, it is a thought-provoking tale of a boy who chooses to take “charge of his own ending” and the interconnected web of lost souls he leaves behind.