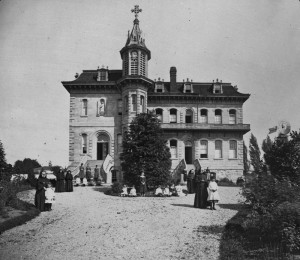 Institution out of time: A Catholic convent and boarding school circa 1880. Photo courtesy Canadian National Archives.

In Alberta, Ontario, and Saskatchewan, parallel education systems still exist: the secular public school boards, and separate Catholic school boards. It is time to abolish that system. The problem of separate school boards is not their Catholicism; it is their separateness. Public funding elevates one religious tradition above all others, and in secular, multicultural contemporary Canada, that is no longer a viable option.

The propriety of the Catholic school system was up for debate recently when the Halton Catholic District School Board banned gay-straight alliances because, as the chair Alice Anne LeMay said, such student groups are “not within the teachings of the Catholic Church.” An investigation by the gay and lesbian newspaper Xtra! later found that such groups are effectively banned in all 29 of Ontario’s Catholic school boards. Just a year ago, Catholic leaders, including Catholic school board trustees, led the charge against a new sexual education curriculum for all Ontario public schools, and successfully scuppered the new scheme.

These episodes are troubling, but keeping score of who wins which policy scuffle is beside the point. These problems stem from the overarching fact of constitutionally entrenched religious public schools. Separate school boards for Protestants and Catholics are a function of Article 93 of the 1867 Constitution Act, intended at the time to protect minority religious rights. The reasons that a 4th century European institution should have been embedded in our 19th century constitution may have made sense at the time, but that time is long past.

The precedent for ending separate education exists. Quebec secured a constitutional amendment exempting it from Article 93 in 1997, and thereafter reorganized its school boards along linguistic lines, not religious ones. Newfoundland and Labrador merged their school boards into one non-denominational system in 1998.

The United Nations Human Rights Committee has already urged Canada [PDF] to “adopt steps in order to eliminate discrimination on the basis of religion in the funding of schools in Ontario.” Polls find significant public support for the idea, and it would undoubtedly save millions in administrative overheads. But pressure from the UN, public support, or financial incentives are all secondary to the simple truth that creating a singular, secular public school system is the right thing to do.

The problem is political will. No party is willing to touch the issue, especially after Ontario Progressive Conservative leader John Tory’s disastrous 2007 campaign promise to fund all religious schools, for which he was widely ridiculed. Party leaders fear, probably correctly, that proposing a merger of the separate and public school boards would be labelled as anti-Catholic. It is not. It is an acknowledgment that times have changed and state-sponsored religious education of any type or denomination is no longer appropriate.