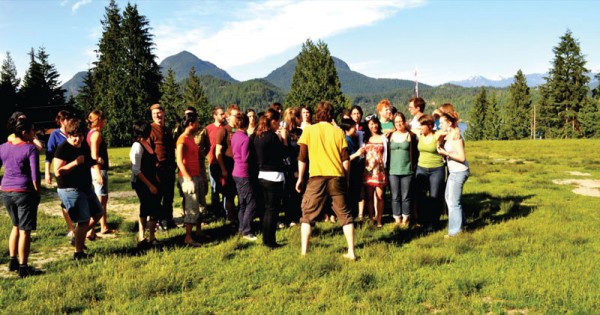 Participants in a recent Next Up training session. Photo courtesy Next Up.

It was the sort of sectarian self-destruction that’s sadly all too common in left-wing movements. After winning strong majorities on Vancouver City Council, the school board, and the park board in 2002, the Coalition of Progressive Electors alliance split in two just a couple of years later. This paved the way for the right to retake city politics in the 2005 election.

Kevin Millsip was one of the COPE school board trustees during that tumultuous term, and the meltdown spurred him to rethink how best to channel his energies and skills. “It was kind of a low point,” he says, “but it led me to think carefully about leadership, unity, and how we build long-run capacities in our movement.”

Fortunately, within a couple of years Vancouver’s left got its act back together, and a united progressive coalition (composed of Vision Vancouver, COPE, and the Greens) handily won the 2008 municipal election. In the meantime, Millsip had co-founded Next Up, an amazing new initiative that has the potential to make an even greater contribution to the next incarnations of social and environmental activism than any single election victory ever could.

Next Up was co-founded by Millsip and Seth Klein (who works in the B.C. office of the Canadian Centre for Policy Alternatives, which still co-sponsors the initiative). Millsip also tapped into other networks he’d been nurturing through the “Check Your Head” high school education project in Vancouver that he had been organizing since 1998. The group has cleverly leveraged other partnerships with the Columbia Institute, the Gordon Foundation, the Parkland Institute, and other established organizations, rather than trying to go it alone.

Next Up began operations in 2007 in Vancouver, and has now expanded to offer its program in Calgary, Edmonton, and Saskatoon. The core of the program is an intensive leadership development course for young adult activists aged 18-32. Each cohort meets one night a week for six months, plus five full-day Saturday sessions. Participants must apply for the program, and are selected based on leadership qualities, demonstrated activist commitment, and a short written assignment. They learn activist, organizing, and communication skills; hone their political analysis; and undertake hands-on activist projects. The program is free.

“We need to learn from how the right has put a deliberate, sustained focus on nurturing and launching a new generation of talented, connected leaders,” Millsip argues, pointing to efforts by groups like the Fraser Institute and the Heritage Foundation to identify and recruit young leaders, train them, and support them as they go out to foment change (change of the wrong kind, that is). In contrast, on the left Millsip believes there is an absence of structures through which progressive young leaders can consciously develop their skills, connect with like-minded activists, and build networks. It’s that void that Next Up aims to fill.

One of the most impressive aspects of Next Up is its deliberate strategy to maintain close networks among the alumni who have gone through the program. Annual alumni conferences (called “gatherings”) are a chance to reconnect with graduates from all years, discuss current issues and organizing strategies, and strengthen networks. The Next Up alumni community already includes 100 talented, inspired, and inspiring young leaders, and that number will grow like a snowball as Next Up offers more courses in more locations.

Millsip himself embodies an impressive combination of hard-nosed organizing savvy and strategic analysis, with the soft-spoken touch of a new-age West Coast activist. He is refreshingly realistic and concrete about the skills and discipline that will be required for us to successfully combat and roll back the juggernaut of the right. But he performs his work with an inclusive humanity that effectively welcomes and encourages new activists, and respects unity and partnerships. (Think back to the bitter disunity that sparked his plan in the first place.) He connects perfectly with the young leaders he is helping to mentor; he has big plans for Next Up and, more importantly, for the activists who experience it.

Next Up is carefully considering further expansion to other parts of Canada, though Millsip is careful not to bite off more than the shoestring operation can chew. The program is already making a difference to the power and capacity of our broad progressive movement, and there’s much more to come.

Jim Stanford Then: Occasional This Magazine economics columnist, 1990s–present. Now: Economist with the Canadian Auto Workers and author of Economics for Everyone.
Share Tweet Email Print