Lauren Kirshner is a very talented young writer. I first met her in an undergraduate workshop I gave at the University of Toronto in 2003. She was such a natural that I submitted one of her stories to Barry Callaghan’s journal Exile. When she read at the launch of that issue, I remember how nervous she was—but she persisted and triumphed. I was thrilled when our jury selected her as one of the seven students admitted to our MA Program in Creative Writing in 2005 and when Margaret Atwood chose hers as the manuscript with which she wanted to work. Lauren went on to publish the collection of stories she completed as an integrated novel titled Where We Have to Go. In 2009, she was named Best Emerging Author by NOW Magazine. In 2010 she founded Sister Writes, a writing program for marginalized women in Parkdale and Toronto’s downtown west end. On her web page she explains: “Creativity builds confidence. Women learn how to represent their stories and interests through writing, becoming active and positive participants in their communities.” There are so many fine young writers whose work I admire and wanted to select for this issue, but I chose Lauren as exemplary because, as a writer, her impulse is to give back. 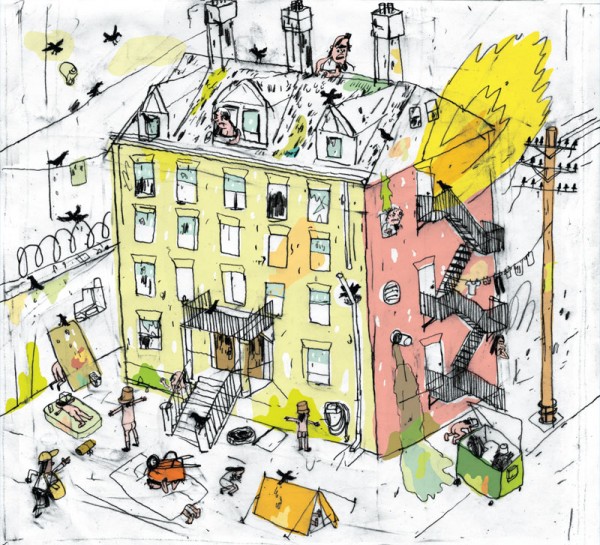 There once was an apartment building and everybody who lived there was ugly. The building was 100 years old but looked much older. Developers wanted to demolish it, but it was historical so they couldn’t, and the City did not know what to do, and they had other worries anyway. The building was simply called Ugly Building. Crows shat on the windows constantly. They did so nowhere else. Mail carriers Frisbee-tossed mail onto the lawn, then ran like children. When garbage workers picked Ugly Building’s bags off the curb, they made a big show of plugging their noses and pretending to faint. Rats dragged pieces of cheese from Ugly Building and between chomps told stories about the ugly people. All of the stories began, “Those people…”

They had no reason to stay out. They did lonely and challenging work for people who did not know their names. In stores, banana peels were placed under their feet. Waiters circled their tables blind. When they went to see films, the projection stopped. Nobody would date them. As a result, the ugly people became self-sufficient. One ugly guy planted food gardens. One ugly woman baked bread. Another ugly guy made shoes, many sewed, and the young ugly people helped the old ugly people set up email accounts. The accounts received poetic letters from Sierra Leone requesting help with money transfers, and new-release bulletins from iTunes.

Yet despite their industriousness, loneliness and dissent grew among the ugly people. They couldn’t date each other, since they found each other ugly, too, and their friendships became strained because they felt they were being judged by one another. Some wanted to disguise their ugliness and break out, but others laughed and called them imbeciles. It was so bad that former friends would not sit next to each other and respected elders kept in their earbuds while others made impassioned pleas. Nobody wanted to work. Crops began to die and the water was shut off. Fearing a crisis, the ugly people called a meeting.

Facing away from each other in a circle, the ugly people wept. They got high. They did a choral reading of The Duino Elegies. One ugly woman suggested they teach the public who ugly people really were, but an ugly guy rolled his eyes and said, “Haven’t you seen the documentary?” Again nobody knew what to do. They sobbed. They got higher. They silently read the works of Tennessee Williams, which only made things worse. But then, another ugly guy rose from his seat and shared an idea. He said they would not wait to be recognized and let in. They had already waited too long—and for what? Instead they would bring the world to Ugly Building. They would build a series of Experience Rooms.

“Oh, can it, you’re high!” one ugly person shouted. But the rest of the ugly people listened.

The next day, the ugly people drew up plans for their Experience Rooms, to be installed in the unused top floor of the building. Each person would have one room to simulate an experience they were missing out on. They spared no expense of imagination or currency to build the rooms. They brought in grass and the Alps and poems and fruits that filled the hallways with pink aromas. And as they worked together sawing and watering and building, the Ugly People began to smile. Two weeks later their rooms were done, and it was a sight to behold, how with bits of shaken-up dreams and stolen nature, they had brought the outside in.

In the Hills Are Alive Room, one ugly guy pedalled a minty Schwinn over the hills from The Sound of Music, and Julie Andrews kissed him and the whole room sprouted edelweiss. In the No Nervous Breakdown in Grad School Room, an ugly woman lay on a silky sleigh bed made from the Bodleian library, and her dissertation was an éclair iced with Sylvia Plath’s laughter. Another ugly guy, who had spent many New Year’s Eves in the emergency room to avoid being alone, built a Love in Scrubs Room where as doctor he administered strawberry sprinkles and red wine and tickled his sad, meek patients—ugly people volunteers—until they shone like rainbows. The ugly people loosened with joy. The old people ate strudel with Julie Andrews. Everyone was still ugly, but a glow emanated from beneath their ugliness. One day in the middle of winter, a mail carrier saw edelweiss blooms falling from a window and, certain he was busting a grow-op, dialled the police, who tried but found nothing criminal. However, word travelled fast and the next day a long line of guests appeared at Ugly Building begging to use the rooms. The guests were not ugly, and were anxious about how to speak to ugly people. They smiled too much, concealed their jewellery in their sleeves, and pretended to have lots of ugly friends. They refused to leave until they were admitted. Flattered by their persistence, the ugly people let the first 24 guests in, and offered them pleasure for two hours.

But after two hours, the guests refused to leave. They took off their clothes and occupied the rooms like elephants, wiping themselves with books and giving Julie Andrews so much tongue. They took photos of the ugly people eating, going to the bathroom and sleeping, using increasingly tinier cameras. Days passed. The guests had fits when the ugly people tried to remove them, threw down money, and begged for more time. They called their friends and joyfully screamed, “It is so ugly here, you should see it!” and hung up. After a few weeks they quit their jobs and their blogs went dead. They started sleeping on the lawn and the mail carrier thought they were junkies and threw airmail on their heads. Many forgot how to speak. They just went around saying “doe a dear” and when they stopped recognizing themselves in the mirror, they put flowerpots on their heads, and banged into each other and fell down.

The guests were in no state to live their own lives. So while they pedalled to the Alps of the moon, the ugly people left Ugly Building and went to the homes of their guests. There, they lay in basement rooms and held hands, telling jokes and stories into the darkness to keep from being scared. In the morning, when they turned on their TVs, they saw Ugly Building. It was burning. The guests were yelling into the camera but they could not be understood. So the ugly people switched off their TVs. Then they went to their doors and locked them.

Lauren Kirshner‘s first novel, Where We Have to Go (McClelland & Stewart), was a finalist for the 2010 City of Toronto Book Award, and was translated into German and Dutch.
Share Tweet Email Print