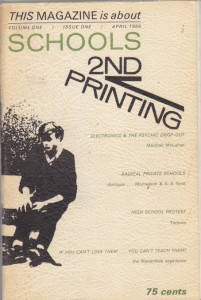 Today we’re very proud to be launching a special issue of This Magazine to mark our 45th anniversary. This Magazine is About Schools published its first issue (seen at right) in April 1966, and quickly established itself as a vital part of the country’s social, political, and cultural landscape. The This that splashed down in the spring of ’66 was a giddy mix of radical politics, pedagogical heresies, and groovy ’60s zeitgeist. It quickly sold out (which is why today, all the archival copies in our office still say “2nd printing” on them), and its message — that the old ideas about education, politics, economics, and culture were being swept away — caught the imagination of a generation of Canadian writers, who flocked to contribute.

In the intervening 45 years, This has been a launch pad, way station, or incubator for some of the most exciting talents in Canadian arts and letters: Margaret Atwood, Dionne Brand, Drew Hayden Taylor, Tomson Highway, Mark Kingwell, Naomi Klein, Dennis Lee, Linda McQuaig, Michael Ondaatje, Stan Persky, Al Purdy, Rick Salutin, Doug Saunders, Jason Sherman, Clive Thompson, and literally hundreds more have been involved in this remarkable and unlikely project over the decades.

For this special issue, we wanted to look back over that impressive history, but also to look forward, to the Canada of the next 45 years. To that end we asked 45 “alumni” of the magazine to each suggest a person or organization they believe is doing important or innovative work, whether in politics, art, activism, academia, or any other field. They came up with a fascinating collection of people and groups who are building our future and doing awesome stuff, and we’ll be bringing you that full list on the website over the coming weeks.

The issue is now arriving on a newsstand near you (it looks like this) and in subscribers’ mailboxes. You’ll be able to read the full issue online eventually, of course, but we’d like to take a moment now to suggest that you consider purchasing a subscription to the print edition if you haven’t already (if you have, thank you!). This is a shoestring operation — always has been, likely always will be — and subscriptions are the best way to enjoy it for a couple reasons. First, it’s cheaper and more convenient for you — the full issue delivered right to your door, at a 46% discount off the cover price, which is, like, wow;  second, subscriptions help support the magazine’s mission, which is to bring you long-form investigative journalism, provocative commentary, and insightful culture reporting by Canada’s most exciting new talents. When you buy us on the newsstand, only a fraction of your dollar makes its way back to us; but when you subscribe, virtually all of the sticker price goes directly to support the magazine and its mandate.

OK, that’s enough lecturing on periodical economics for one sitting. Remember to keep checking this.org/45, where all the profiles will be made available over the next few weeks, and become a fan on Facebook or follow us on Twitter to keep informed about new articles as they’re posted. Finally — and this is so cool — take a look at our all-new online cover gallery, a way for you to browse and download images of every cover we’ve ever published over our 45 years.

After the jump, you’ll find the complete list of our alumni featured in the issue and the individuals and organizations they want you to know about. It makes for a very cool read. Thanks for 45 amazing years so far, and many more to come.