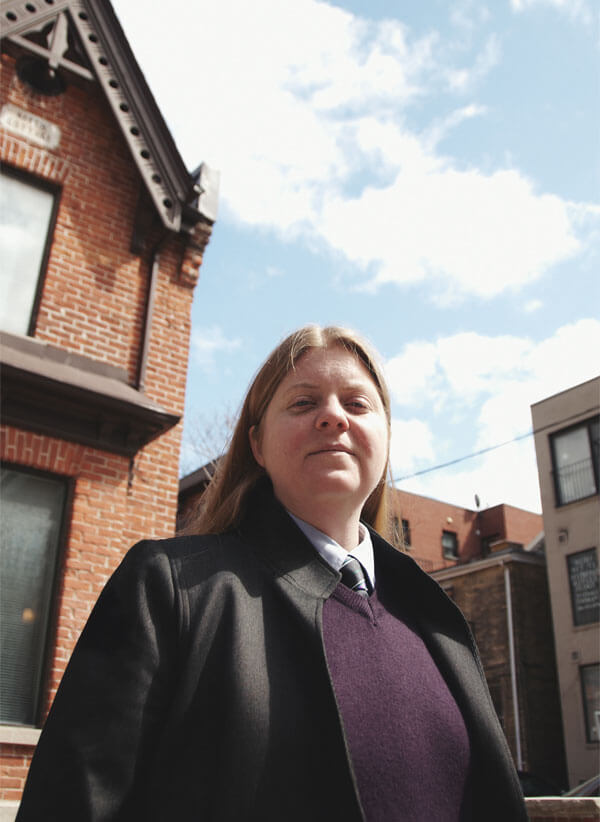 Not every punk-rock high school dropout grows up to become a refugee lawyer, but Toronto-based attorney Alyssa Manning isn’t exactly ordinary. Barely into her 30s, Manning has made a professional niche for herself by working with U.S. war-resister files, defending such high-profile clients as Jeremy Hinzman, James Corey Glass, and The Deserter’s Tale co-author Joshua Key—American soldiers seeking sanctuary in Canada because of their refusal to serve in Iraq on moral grounds.

As a sharp street kid in Kingston, Ontario, a city of seven prisons, Manning observed glaring flaws in the Canadian justice system through her daily interactions with on-again, off-again inmates. This spurred an interest in criminal justice, and eventually led her to law school. It was a placement at Parkdale Community Legal Services in Toronto that ultimately steered her toward immigration and refugee law, where one of her first files happened to be a war-resister case.

“It was sort of an intersection of a couple of different things that I’d studied in my past,” says Manning. Her interest in the criminal justice system—which is, for civilians, what the court-martial system is for military personnel—was an added bonus.

Manning finds her work rewarding and stresses that “people who are aware of the war resisters’ situations are supportive.” However, there is the occasional misconception that war resisters “‘should have stayed in the States and fought it in their own countries.’ Unfortunately, there really isn’t an opportunity for them to do that.”

The reason, Manning explains, is the United States’ outdated court-martial system that refuses to hear testimony of human-rights violations on the ground in Iraq in cases of desertion. In other words, war resisters have little choice but to flee to Canada to avoid imprisonment and, arguably, to receive a fair trial. As such, Manning believes the deportation of war resisters results in a violation of both Canadian and international law.

“Under the international law that’s applicable to refugees,” she explains, “someone is entitled to refugee protection if they are refusing to participate in actions that would be considered breaches of the Geneva Convention or International Human Rights Law. So technically, refusing to participate in Iraq, whether or not the war itself is illegal, but just based on what’s actually happened there, all of these men and women that have done that are entitled, and arguably required, to do so.”

Manning makes no attempts to conceal the respect and admiration she feels for her clients: “Their dedication to have made the sacrifices that they did, leaving behind their homes and their families to stand up for something that they really believed in—I really find that admirable.”