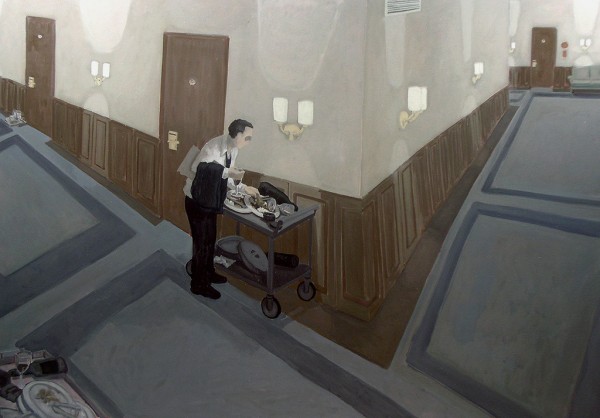 The hotel hallway is empty, save for trays of dirty dishes stacked on the muted blue carpet and on a room-service cart along the beige walls. A man in a loose tie bends over the cart, holding a glass of red wine and stooping tentatively over a half-eaten plate of food. He reaches for a chicken drumstick, hazarding a bite from the refuse pile before his colleagues discover his secret indulgence.

The guilty pleasure, intense privacy, and mounting tension of moments like those depicted in his darkly funny 2009 piece “Moral Hazard” underscore Michael Lewis’s large-format paintings. He skewers every office worker’s dream to get away from the grind of daily life in his 2010 piece “Options,” a satirical depiction of a man attempting to escape his office by climbing head first through a ceiling vent. Lewis hasn’t worked in the cubicle farms he documents prolifically in his work, but for the 41-year-old Toronto artist, the feeling of being in a workplace mirrors the experience of living in a society where everyday life is subject to the surveillance, homogeneity, and private crises of business culture.

His paintings aim to capture the experience of living in the past decade: the postmillennial, post-9/11 era where right-wing politics took centre stage in North America.

Many of those works are appearing this spring at the Art Gallery of Mississauga, where Lewis’ paintings form part of a touring group show, Sorting Daemons: Art, Surveillance Regimes and Social Control.

“Something really fell off of reality when George W. Bush came in, for me,” he says. Conservative notions of “the good war” and our cultural obsession with commercial and consumer life are more overt than ever, Lewis says—a troubling context for an increasingly uncritical society.

“It’s quite apparent that this is not freedom that they’re pushing,” he says. “My work has addressed the kind of psychology that will allow for acceptance of these extreme messages.”

Lewis explored the Wall Street financial crisis in Purge, a series he began developing in 2008 during the crash. At the time, the global economic crisis was presented to the public as though it had spontaneously erupted out of the blue, but Lewis’s paintings explore the culture of complacency and denial in big businesses that foreshadowed the collapse. “It seemed to let people off the hook for not really having the foresight, when it was definitely out there,” he says.

Purge is anchored by Lewis’s ironic depiction of office workers literally collapsing in offices and at trade shows. His choice to blot out the eyes of his subjects and almost exclusively paint in the dark, drab tones of traditional office environments lends a sinister quality to his paintings. Their surreal, often embarrassing subject matter explicitly interrogates the nightmarish aspect of office life. 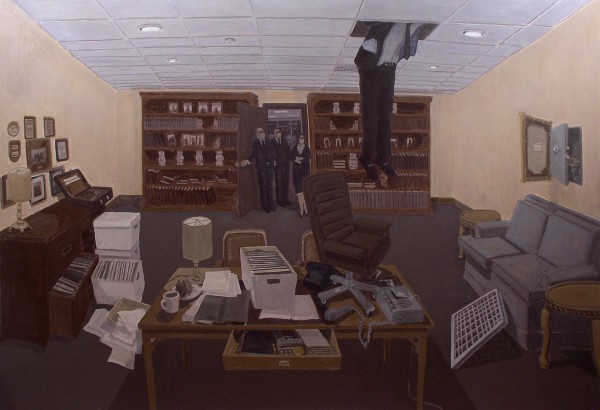 The stuff of nightmares, perhaps the very dreams of the office workers featured in previous works, was investigated in a January 2011 show, The Deformity Competition, at Toronto’s Meredith Keith Gallery. There, Lewis abandoned straightforward depictions of office life for the more macabre territory of skeletons and corpses.

While Lewis’s paintings deal with the political, financial, and mental fallout of a dark decade, his black humour introduces welcome notes of levity, too. “I know it doesn’t seem exactly funny, people collapsing everywhere,” he says. “Even though it’s a very serious time period and very serious subject matter, I’ve been pushing toward bringing a little humour to it.”

After years of war, financial collapse, and social unravelling, the dark humour of Lewis’s paintings comes as a welcome relief.