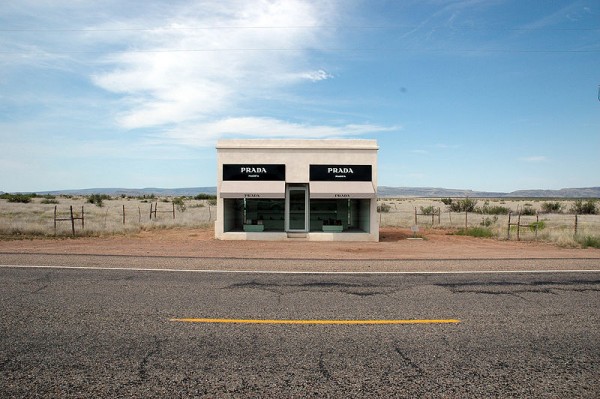 Prada Marfa, one of Marfa, Texas' notable artworks. Marfa became a modern art destination when Donald Judd opened a museum there in the 1970s.

When you drive into Marfa, Texas, from El Paso the first thing you come across is a tiny Prada store. No one works there and no one shops there—it’s a sculpture, built in situ by artist duo Elmgreen & Dragset. Marfa, current population 2,121, became an unlikely modern art destination when the famous minimalist Donald Judd opened a permanent museum here in the ’70s.

I came to Marfa not for its art, but for its light. I’m interested in how we see light, how we think about light, and how light behaves. I’ve been working on a collection of poems that use light as their material, and that concentrate on proportion and balance.

About 15 kilometres outside Marfa there is a viewing station where, at night, light behaves in ways that can’t be explained. During the day, this field is flat and the grass is dried yellow. There is so much sky out here you don’t notice anything else.

But at night, balls of light come into this field. They split, hover, move backwards, flash. For decades, locals and tourists have come out here to look and to guess at what these lights are. Some believe this is what happens to lightning after it hits the ground. Others believe it is swamp gas or cars from a nearby highway. The lights look like circles. They flash for a few seconds, or bounce lightly off of each other, or hover by themselves. They pop up nearby or they get close together and split. I don’t know what this is and can’t reason this not-knowing with some theory or study. Were they fireflies? No. They seemed too big and too bright to be fireflies. Was it someone with a flashlight? There was one hovering close but no human figure near it. Was it light from a house far in the distance? Silly—a house wouldn’t move around like that. And the clusters? Are they from an airport? No. Airplanes don’t fly that close together and they don’t move backwards.

None of these things could explain what was out here. I turned to look at the other side of the viewing station. Here. This is light I know. The thing I felt most moved by. Brief flashes of thunder and stars sprinkled across a big dark beautiful wide sky. At first I could only see a few stars, but I kept looking, and in that looking tinier ones made themselves visible between the ones already there. After a while, the stars started to look like tiny needle pins that floated into the night sky, poking holes. Then they started to look like shards of the sun, if the sun could break and had broken into little pieces. The stars. I know what those are. A thin piece of light scrawled across the sky. Lightning. I know what that is too.