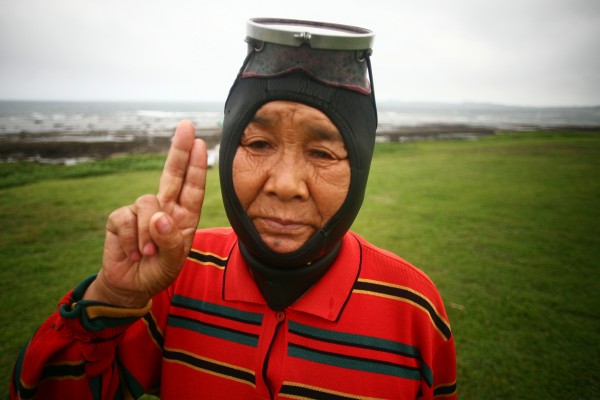 The mermaids of Korea’s Jeju Island are a sight to behold, but not in the way you might think. They don’t have long, flowing locks, nor figures reminiscent of magazine models. They don’t sing Disney ballads. The sound they do make is through whistling—their own method of inhaling oxygen and exhaling carbon dioxide after they surface from the water. Most haenyeo, literally “sea women” in Korean, are grandmothers. They have weathered faces, deep wrinkles, and walk with slow, measured steps. Each morning at dawn, they plunge into the sea to catch clams and other marine life. They dive without much equipment, using only flippers, weighted vests and rubber diving masks. Their method is simple—mark their location in the water with a float, use a weeding hoe for digging up the sea life, and gather their harvest in a net. Some dive as deep as 20 metres, staying under for as long as three minutes without surfacing.

When my friend and I rented mopeds to explore this small island off of Korea’s southern coast, seeing the haenyeo dive was a top priority. After all, the practice helped place local traditions on the UNESCO Intangible Cultural Heritage List in 2009. We had read about them in our Lonely Planet guides and heard about them through friends. Devastatingly, we both caught a bad case of food poisoning our second evening there, so waking up at the break of dawn was far from feasible. The majority of the trip was spent nursing ourselves back to health and easing stomach cramps, and we gave up hope of actually seeing the haenyeo ourselves.

On our last day on Jeju, we were determined to see more of the island, ill or not. Not up for anything strenuous, we went to spend the afternoon with a picnic near Sunrise Peak, a popular destination on the island’s east coast. Before we even had a chance to spread the picnic blanket, we spied a small figure in the distance walking toward us with what seemed like a net in one hand. Closer and closer she came—until we realized it was one of the haenyeo, standing before us with that day’s catch, still wearing her rubber diving mask. Without a word, she plopped herself down on the beach and motioned for my friend and me to do the same. Because she spoke no English, and our Korean was broken at best, our communication consisted mostly of hand gestures and chuckles. We sat with her for about 10 minutes as she showed us her catch of the day—squid and other sea life she’d scooped up by hand. She spent every morning in the sea—using practices of eras past, armed with just her two calloused hands and an unflinching strength that seems nearly mystical to modern-day generations.

According to the Korea Tourism Organization, there were about 30,000 haenyeo on Jeju Island in the 1950s. By 2002, the number had dropped to 5,600 divers, more than half of whom were at least 60 years old. When this group of women retire, it seems like the legacy of the haenyeo will also vanish into history books, nearly as mythical as mermaids themselves.