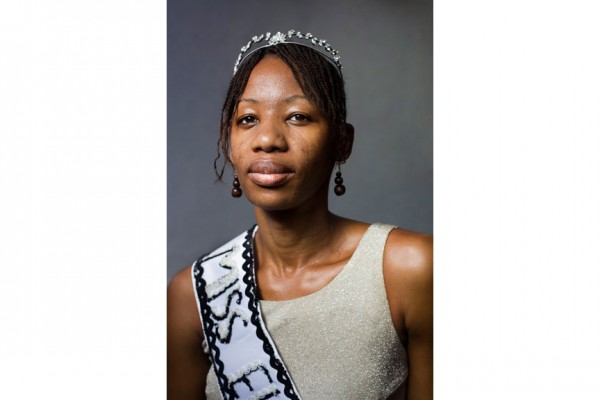 The winner of the "Miss Talavera Bruce" women's prison pageant.

Rio de Janeiro has a murder rate as high as a war zone—millions of impoverished people here resort to crime for survival. A kid from the favelas of Rio has limited career options: kidnapper, cocaine trafficker, gang leader, robber, or hit man. For many, prison is safer than the streets, and comes with more reliable food and shelter.

Carnaval is one of the hardest times of year for imprisoned Brazilians, as their fellow free citizens pour into the streets in a sea of colourful celebration. In February 2009, I traveled to the notorious Bangu Prison Complex in Rio to photograph the women who live there. I wanted to see how prisoners celebrate such an important national holiday behind bars.

When I entered the prison for the first time, I was shocked to see bright pink, blue, and yellow paint on the main corridors of the jail. I felt I was shopping for candy, not walking inside a building containing some of the city’s most dangerous criminals. Prisoners walked freely in the courtyard and garden, picking up leaves, changing garbage bags, working. Everyone was smiling. It all felt a little too happy—considering that the women I met were imprisoned for smuggling, armed robbery, even murder.

I made a friend inside, Michelle, from Amsterdam, caught at the Rio airport smuggling cocaine. She had learned Portuguese during her difficult first incarcerated year, and became my translator and guide to the inner workings of Bangu. Outwardly, the women I talked to and photographed were cheerful, smiling, glad to have the small luxuries I snuck in for them—chocolate, phone cards for their illicit cell phones, or the plastic Carnaval crowns that people wear during the five-day holiday. But the stories they told while I took their portraits betrayed their sadness and loneliness inside the massive prison.

The prisoners I met are young women who were never given the chance to grow, or who grew up too old, too quickly. Born into poverty and with few options, they had fallen into desperate circumstances. One inmate, Sylvia, told me she especially misses giving Carnaval party tours to tourists, now that she’s in jail for armed robbery. When she was young, she got a phone call from her father who said he was going to beat up her mother. When she was in her teens, her father tried to kill her mother. From that point on, she decided she would never again rely on a man for support. That is what led her to armed robbery. After spending months in jail she, like many other prisoners, has turned to the comfort of God and religion for guidance and understanding. But, like many others, when she is released, the chances are high that she will be back within a matter of months.