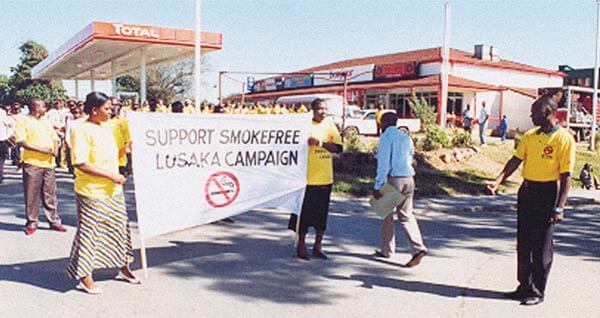 As the wheels hit the hot asphalt of the runway, I look up to see the frenetic expressions on the faces of my fellow passengers—a look that falls somewhere between anxious and anaphylactic, and it’s clear they’re desperate to get off the plane. It’s been a short and relatively painless flight from Nairobi, Kenya, to Lusaka, Zambia, our final destination. But these people obviously need a cigarette. Once nearly ubiquitous, smoking has been on the wane, particularly in Canada, where it seems new antismoking legislation comes into effect almost biweekly. First it was bars, then restaurants. Now even some patios are off limits to those who like to suck back thick blue smoke in the great outdoors.

There are new no-smoking laws cropping up in nearly every country, from Argentina to right here in Zambia. The developing world has been the tobacco industry’s cash cow for years now, as cigarette companies have replaced lapsed smokers in the United States, Canada, and Europe with millions of new ones in Asia and Africa.

Zambians aren’t much for smoking, actually: about 22 percent of Zambian adults light up, about the same as Canada—but Zambia’s anti-smoking laws are a lot more stringent. When I arrived in Lusaka, a new public smoking ban had been in effect for a little more than a month. On the surface, the ban is similar to legislation you might find in any other country in the world: smoking is prohibited in public spaces, and failure to comply is punishable by a fine of 400,000 Zambian kwachas, or around $100 (roughly the average monthly income in Zambia) and up to two years in prison.

But in Zambia the term “public space” has been left entirely open to interpretation. In fact, any public space under the jurisdiction of Zambian law must adhere to the new smoking ban. This includes restaurants, bars, and shopping centres, but also open-air markets or parking lots—effectively any space outside of your own home. The ban is further complicated by the fact that it may be enforced not only by police officers, but also “complainants,” essentially any civilian who finds your smoke offensive and decides you’re violating the law. A spokesperson for the Lusaka city council went so far as to suggest that the law might be enacted retroactively against a person who still had the lingering smell of cigarettes on him or her, even if he or she weren’t actually smoking.

I don’t smoke, but a straw poll of friends and colleagues who do suggested they were confused and concerned. The police themselves, who are tasked with enforcing the new law, have few directions as to what constitutes a “public space.” Smoking friends worried they may have to pay a “fee” (in reality, a bribe) to avoid arrest. It remains to be seen whether the new law will improve the health of Zambian citizens, but it certainly means my fellow plane passengers will have a while yet to wait before crossing the tarmac, claiming their bags, leaving the airport, and finding a secluded place to furtively strike a match.