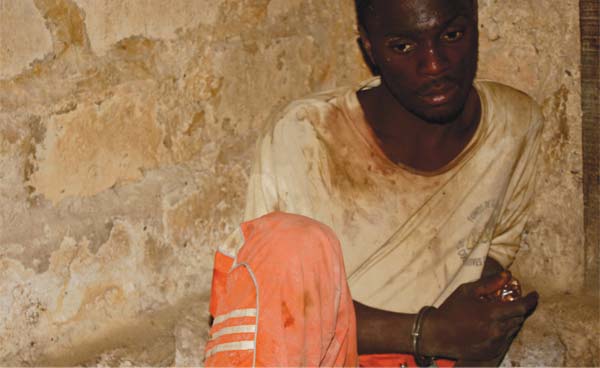 On Christmas Eve, 1989, Charles Taylor’s band of rebels stormed the small border village of Butuo, Liberia, taking over the police station and sparking a civil war. Chief Inspector Morris Gonylee waves dismissively at the state of ruin the station now lies in, a common sight in a nation struggling to rebuild from this 14-year conflict. A tethered bull stomps and paws the dirt as we walk toward the wood hut now serving as a prison. One young man sits inside, filthy and morose. No electricity, toilet, chair, or bed: the small hole in the mud brick wall lets in a single shaft of light. A piece of an old engine block is the only furnishing on the concrete floor, upon which he sits awkwardly, handcuffed to the hunk of rusted metal.

I came here to report on the story of a jailed man who had fled across the border from Ivory Coast after nearly killing his wife. But this quiet young man wasn’t him. So I offered him the two bags of peanuts I had in my camera bag and asked if we could talk anyway.

Through our broken French and English, a picture of his plight took shape. Someone saw him near a store in Ivory Coast with a “piece of merchandise” and accused him of theft. Fearing mob violence—unsettlingly common there, a product of a weak judicial system and usually fatal, guilty or not—he fled, swam the border, and got caught here.

Two failed escapes and an official deportation request (by a concerned uncle) later, his legal fate was unclear. “I just want to go to court, to show that I have innocence,” he told me forlornly. Perhaps he realized how slim this prospect is: almost 90 percent of Liberian prisoners sit awaiting pretrial. The court closest to Butuo takes several hours by motorbike, down bridgeless, unpaved roads. The Butuo police—like most of Liberia’s rural police—have no money for gas, even if they did have a car or motorbike.

The midday sun stings after I leave the musty jail. I ask Gonylee what became of the alleged wife-killer, and receive a grunted response, which makes me fear the worst. We amble back up the hill, and stop in the shade of a mango tree where a man with a large cut on his face stands in front of several women cooking. We exchange smiles and handshakes, but no words.

“This is him,” Gonylee says casually, gesturing with his left hand.

“The man, the man you are asking about.”

I clarify: “The man who killed his wife?”

Not exactly, I learn: he stabbed her repeatedly with a machete, but she’ll live.

“But why is this man not in the jail!?” I manage to stammer.

Gonylee laughs loudly. “But where would he go? The community is aware of him. He cannot leave!”

Everyone joins in his guffaws, finding obvious amusement in my confusion. The man with the cut on his face flashes me a broad, genuine smile, looking relaxed in the hot shade.