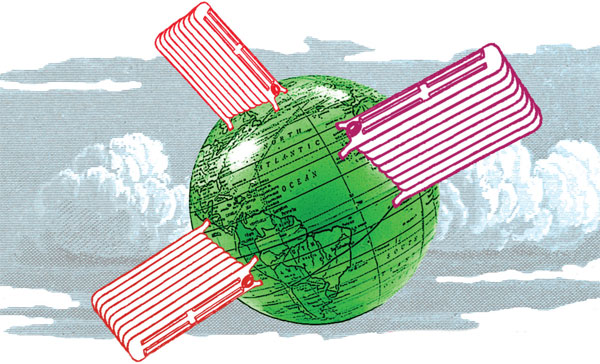 In the world of green power, enhanced geothermal systems technology has big potential. How big? Like enough potential to provide 2,000 times the United States’ annual energy consumption kind of big.

The premise of EGS is simple: use recently developed drilling technology to bore a hole four to six kilometres deep into the earth. Pump in water, let it pick up the heat at that depth (150°C or so), then draw it back to the surface to drive electricity-producing turbines. Unlike solar, wind, hydro, or conventional geothermal technology, EGS can be implemented virtually anywhere; it generates big, steady and reliable power; and it produces negligible pollution. No wonder many countries, including Australia, Japan, and Iceland, have ponied up investment in EGS.

But where is Canada in all of this? “Absolutely nowhere,” says Brian Toohey, board director of the Canadian Geothermal Energy Association. According to Toohey, Canada is one of the few developed nations in the world without a single conventional geothermal plant (which foregoes expensive drilling by exploiting rare plumes of the earth’s natural heat at or near the surface), let alone an EGS plant. There are a number of reasons for the absence of interest here, he adds, including lack of public familiarity with EGS and high front-end set-up costs. But, really, it boils down to support, says Toohey. There isn’t any. Neither the federal nor provincial government is offering the funding kick start R&D needs for any EGS industry to take hold.

Tom Rand, a clean technology analyst at the Toronto-based MaRS Discovery District, shares Toohey’s enthusiasm for EGS, calling it “low hanging fruit” in the search for fossil fuel alternatives. Rand has another explanation for why EGS isn’t taking wing in Canada: green-energy fatigue. “There are already a lot of proven alternative energy technologies,” he says, “So a newcomer is like: ‘Why EGS?’ Which makes it very unlikely for EGS to get funding.” Even so, says Rand, the technique’s unique advantages position it perfectly to replace coal plants on a one-to-one basis. That alone, he says, makes it something “that absolutely must be considered.”

Both men also blame Canada’s historic abundance of cheap energy resources for the government’s short-sighted energy policy. Yet while carbon sequestration—a means of slowing the buildup of greenhouse gases released by burning fossil fuels—receives huge amounts of funding, EGS is ignored. One of these methods represents a way of putting a green face on the already lucrative fossil-fuel industry; the other, a potential way of escaping its clutches. Guess which way the research money is flowing?