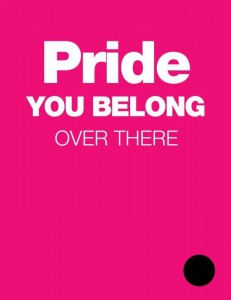 "Pride: You Belong Over There". Image from Blackness Yes!

You may have already heard something of Pride Toronto’s new sign-vetting policy,  its banning of Queers Against Israeli Apartheid (QuAIA) from the parade, and its outlawing of the term “Israeli apartheid” from all Pride-related events.  Or about how, after weeks of public outrage, including the humiliation of having several Pride honourees return their awards, Pride Toronto scrapped the policy, rescinded its decision to exclude QuAIA and overturn the ban on the term “Israeli apartheid.”

What you might not have heard as much about are other decisions made by Pride that, like the QuAIA debacle, reflect a general indifference towards historically marginalized people: organizing the second annual Trans March without input from Toronto’s trans community, for instance. And relocating programming for women, youth, and people of colour to off-site, inappropriate venues—again without community consultation.

For the past 12 years, Blackness Yes!, a community-based committee, has organized Blockorama, a space for black queer and trans people, and their allies. According to committee-member Syrus Marcus Ware, Pride’s recent actions reflect a “pendulum swing” against the diversification efforts of the last 30 years, and an obvious prioritizing of corporate sponsorship. (Xtra found that in 2009, corporate sponsorship made up 41 percent of Pride’s revenue).

Blackness Yes! would know. Three years ago they were told they could no longer host their bustling all-day block party at the Wellesley Street parking lot, as it would now be home to the TD-sponsored festival stage and beer garden. Blocko—as it’s commonly known—was relocated to the parking lot of a nearby Beer Store.

“Of course we had our first ever medical emergencies at this space. And they were directly related to its size,” Ware said. Blocko attracts up to 25,000 participants throughout the day. At one point during the 2007 event, a pregnant woman had a seizure and emergency medical services were unable to reach her due to the density of the crowd.

The next two years found Blockorama at George Hislop Park, about four blocks north of the Pride hub at Church and Wellesley Streets. On the downside, with thousands of people traipsing through the park, the ground eventually wore down to a soggy, muddy mess—not the safest environment for a dance party. On the upside, it was a bigger venue than the Beer Store, it was a green space, and it was a constant space—somewhere Blocko and its community could call home.

That was until Blackness Yes! found out earlier this year that they would again be relocated, this time to the Alexander Street parkette—a venue considerably smaller and less safe than previous locales thanks to hilly, uneven ground. Understandably, Blackness Yes!, its community, and their allies were pissed. And it wasn’t just about the crass commercialism commandeering the festival; it was time to address something much more insidious.

In its infinite wisdom, Pride Toronto uprooted a largely diasporic community, which has struggled with displacement and second-class citizenship for generations.

“Many felt displacement as a continued experience,” explained Ware.

Ware compared the relocation to “tending to a garden, taking care of it until it blooms” only to have someone take it over, move you to a sandy patch and tell you to start all over again.

In response to the community blacklash against the move, Blackness Yes! organized a town hall on April 13 at The 519 Church Street Community Centre, where Toronto’s black LGBTQ community members had the chance to voice their concern and express the importance of Blocko as a space of resistance, community, celebration, and connection, to Pride’s decision-makers. (Ware told me it took five months for Tracey Sandilands, Executive Director of Pride Toronto, to meet with Blackness Yes! That in itself is quite telling.)

In an interview with Deviant Productions at the meeting, Blackness Yes! member Junior Harrisson said that Pride has simply created an event and expected people to show up. Finally, heeding some consideration for Blackness Yes!’s needs and demands, Pride guaranteed the group George Hislop Park for this year and the next. Sandilands’ “solution” was a laundry list of offers and caveats, amounting to the same thing Blocko had last year. No surprise that Blackness Yes! remains cautious.

“They don’t get it…I’m still not 100 percent convinced they have our best interests at heart,” Ware said. 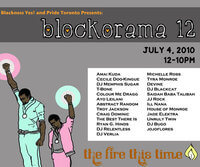 Few commentators on the situation surrounding Blockorama and QuAIA have done as Thea Lim at Racialicious did, and looked past the issue of censorship to address the indifference Pride has demonstrated towards groups like Blackness Yes! and QuAIA.

Whatever may be the root cause of Pride Toronto’s continued unresponsiveness towards historically marginalized groups, the communities involved have responded with a message of solidarity. Blockorama’s theme for this year, “Fire This Time”—a play on James Baldwin’s book of essays, The Fire Next Time—does well to sum it up: No more.