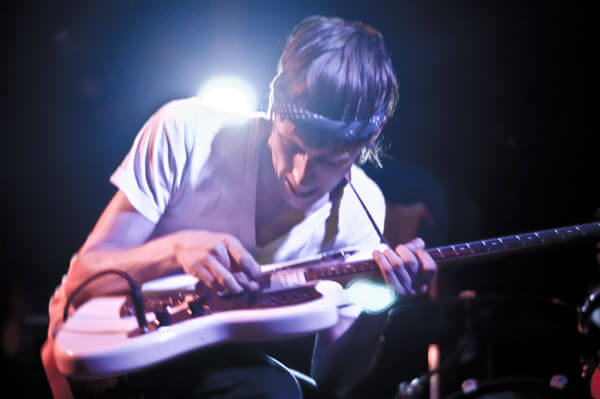 Willis Ryan of The Grass playing at NXNE, June 16, 2010. Photo by Luke Champion

While the dust settles here in Toronto from the mayhem of the G20 this past weekend, let’s pause for just a moment and take a look at this week’s edition of Tuesday Tracks—your weekly does of crazy cool Can-Con. This week is all about throwbacks, reinventing the forms, styles and sounds of the past and making them new, fresh and better than ever.

First: The Grass may hail from Dartmouth, Nova Scotia, but their hearts are clearly in the psychedelic streets of a swinging 60’s London. Check out “Ain’t Running Scared” off their latest release Rogue Waves:

Second: From the carefree fun of the 60’s, Black Mountain takes their cue from the druggy drone of 70’s heavy metal. While their upcoming album Wilderness Heart won’t be released until September, the band has released a little teaser to tide things over. Check out “Old Fangs”:

Third: The latest album by Montreal’s Wolf Parade is out today. Expo ’86 is a densely packed album, something Wolf Parade have become well known for. What they do well, though, is pack in all those sounds without ever making the songs sound cluttered. Here’s “What did my lover say? (it always had to go this way)”: