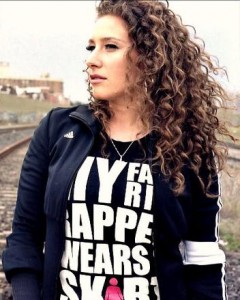 In this edition of Listen to This, Associate Editor Natalie Samson talks with Eternia, the Canadian rapper whose music and volunteer work aim to challenge gender-based stereotypes and injustices such as sexism in the music industry, violence against women, and rape. Eternia was in Toronto two weeks ago for the People’s Summit, the alternative gathering to the G20 leaders’ conference, where she performed for a rapturous crowd. Be sure to stay for the end of the podcast, where you can hear a song off of Eternia’s 2005 album, It’s Called Life. Be sure to keep an eye out for Eternia’s newest album, At Last. The album is a collaboration with Canadian producer MoSS and it’s set to release on June 29, 2010.

Included in the podcast is this 2005 Eternia track, Love, which was used to promote Amnesty International’s “Stop Violence Against Women” campaign.