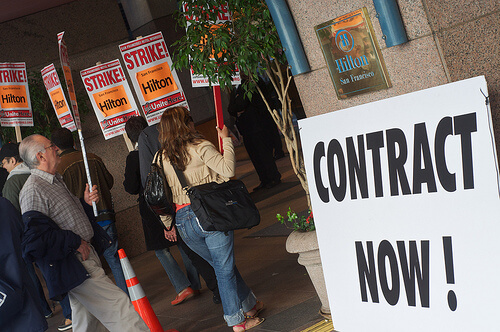 Things just got a little more complicated for Toronto in the buildup to this month’s G20 summit.  If the 10,000 uniformed officers, 1,000 or so unlicensed private security guards, airport-tight surveillance and checkpoints, the much debated “sound cannon” and the expected thousands of protesters didn’t promise enough drama, the largest hotel workers’ union in the city has voted to give strike authorization should contract negotiations for a renewed collective agreement break down.

Unite Here local 75, representing 5,500 hotel and hospitality workers from 32 hotels in the Toronto area, voted 94 percent in favour of striking if a new contract is not established. In a press release on their website, “declining working conditions and other draconian measures” are cited as causes for the strike: shortened and split shifts, increasing reliance on part time workers and contracted out services such as food prep have all resulted in a loss of income and benefits for the workers.  While hotels are coming out of the recession and enjoying the economic recovery, many forecasting promising years ahead including substantial profits from the G20, hotel workers have been locked in the recession.  The major issues, according to union reps, are job security and workplace conditions.

The strike comes at a particularly inopportune time for the city of Toronto, as nearly every hotel room is booked to accommodate the expected 15,000 visitors.  While this has many opposed to the G20 excited at the prospect of world leaders performing their own turn down service, concerns over Toronto’s hospitality industry grinding to a halt during a strike were quickly laid to rest by Unite Here; the only hotel that stands to be affected be a strike before the G20 is the Novotel Toronto Centre where workers will walk off the job on June 23 or 24 if a new collective agreement is not accepted.

Paul Clifford, president of the local, said that no other hotel will be in a “legal striking” position before the summit but that other hotel workers would join those picketing at Novotel; “that’ll be the focal point of our attention prior to the G20,” he said.  Cifford continued, “we want to both act responsibly for the G20 but also show that we are really determined to win a better standard for hotel workers, so that’s why we’re possibly engaging in a very limited strike action at the Novotel Toronto Centre.”

While the impact of the strike may not be as far reaching as originally thought, some French delegates and media personnel staying at the Novotel may be forced to navigate picket lines—as well as G20 security measures—during the summit.