This week on Tuesday Tracks we’re still trying to play a little bit of catch up to the slew of great Canadian releases in May. But first, a preview of the new Arcade Fire. 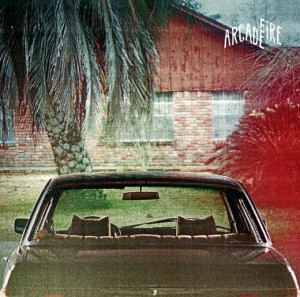 Cover of the Arcade Fire's new single "The Suburbs"

Last week, Arcade Fire finally let slip the release date of their hotly anticipated third album The Suburbs. Along with announcing the August 3rd release, they also awarded their fans with a sneak peek of what the album has to offer. Two Songs, “Month of May” and “The Suburbs”, are available right now. Neither are really destined to be classics in the Arcade Fire canon—they both lack the urgency that songs like “Rebellion (Lies)” and “Keep the Car Running” so successfully evoked. These songs sound much more straightforward, smaller, than we’re used to from the band, with less orchestration. I’m all for trying new things, but if it ain’t broke….

They’re not bad songs at all—just slightly underwhelming after a three year wait.

And “Month of May”

The Sadies have always seemed like the quintessential Canadian band to me. Accomplished, respected, talented, but extremely overlooked. They’re combination of roots, country, rock with a little bit a pop hooks thrown in, seems distinctly Canadian. Their latest record, Darker Circles, furthers their mythology and takes them another step towards greatness. Even the video for “Postcards” evokes a kind of surreal Canadiana with its lo-fi production value and goofy special effects.

Since Justin Rutledge left academia for the open stage, his literate and graceful songwriting has continuously garnered critical acclaim. His newest, The Early Widows, surely maintains that tradition. Its restrained confidence delivers another beautiful chapter in his catalogue. The first song, “Be a Man” was co-written with Michael Ondaatje: