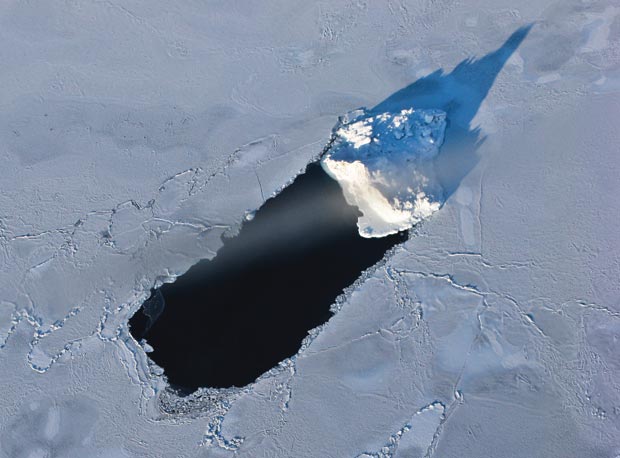 From “Studies in Sea Ice” (2009) by Roberta Holden. Image courtesy the artist.

Vast, impressionistic, and haunting in its sparseness, Roberta Holden’s landscape photography calls to mind the dark, faraway corners of memory and dreams. Taken from days in the Arctic, over the frozen oceans near Greenland, and during the long nights in Morocco, Holden’s work evokes nostalgia for landscapes untouched by human development—a phenomenon many of us have never experienced. Despite the fact that her work focuses on international subjects, her photographs feel distinctly Canadian in their quiet study of our connectedness with the natural environment and the unspoken effects of the land on us.

Holden, now 33, spent her childhood on a sailboat. her parents sailed frequently up the coast of British Columbia, often stopping in remote locations to hike and work. Taking breaks from life at sea, they would dock the boat in Vancouver’s Coal Harbour and spend seasons harvesting wild rice in rural Manitoba as part of a family business. Until she was 14, Holden worked in the rural landscapes she now documents in her work.

“I think a lot of traditional landscape art tends to romanticize the natural environment. And of course there are a lot of experiences where you can sit back and just appreciate the environment,” she says. “But when you’re actually living and working with the land, it’s just an everyday experience that takes more of the senses than just sitting back and gazing upon it. It’s not just a passive, peaceful thing to look upon, but there’s a struggle in just surviving the day-to-day hardships of the landscape.” Tensions of ancestry, colonialism, barren spaces and the vulnerability of a planet facing the effects of climate change play out in Holden’s most recent touring exhibitions, “Studies in Sea Ice” and “The Stillness of Motion: Changing Polar Landscapes.” Studies in Sea Ice is a series of archival images taken in 2009 by helicopter off the northwest coast of Greenland, a region that has undergone a significant warming trend in the past decade. The Stillness of Motion is a series of black and white images shot in Arctic Canada and Antarctica in 2007 and 2008. The series explores the intersections between humans and the landscapes they inhabit.

Both series have been part of six exhibitions in the Vancouver area during the first three months of 2011. In that time, Holden travelled for the second time to Morocco on a five-month photography trip, where she honed her skills as as photojournalist. As someone who hates having her own picture taken, she can identify with people who don’t like being photographed, an understanding which informs the way she interacts with her subjects.

“It’s taken a little longer to be able to bring a camera out in situations that didn’t create a barrier between people,” she says. “That’s what I see as a problem with a lot of photojournalism that focuses on different cultures.

There’s often a lot of that objectifying of people because you bring a camera to a situation.”

Holden brought her camera to a peaceful protest in Marrakech in late February after which the military ordered that she delete all but two images. Both of them depict a human barricade of soldiers.

Holden’s encounter in Marrakech stands in direct opposition to what she hopes to achieve in her photography—to break away from uni-directional, us-versus-them narratives and, in so doing, illuminate social justice issues, political tensions, and the grey spaces in between. “It’s more of a visceral experience,” she says of her work. “Something felt and not just seen.”