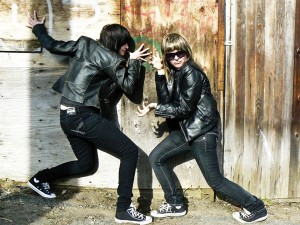 In this week’s edition of Tuesday Tracks we criss-cross the country from coast to coast, moving from Halifax all the way to Vancouver with a stop in Montreal in between. But while these bands may be separated by several thousand kilometres, each one displays a similar ability to get you out of your seat and move. The long weekend may be over, but that doesn’t mean you can’t keep celebrating.

First up: The First Aid Kit. Not to be confused with First Aid Kit —a couple of Swedes—who are touring North America at the moment with stops in Vancouver, Toronto and Montreal. The First Aid Kit are a five piece band from Halifax with energetic, hook heavy, electric-pop music for the soul. Unfortunately in order to experience their incredible live show you’ll have to be in the NS for the time being, but check out “My Resignation” to tide you over.

Next: The story of Braids began a few years ago in Calgary. At the time they were known as the Neighbourhood Council, but a move to Montreal brought along with it a new name and some new songs. “Lemonade” is a lengthy, experimental piece of pop perfection. Even with its great expanses of musical meandering, it maintains its focus and dedication to joyous hooks. Check it out:

Finally: Becky Black and Maya Miller have been talking about being women for some time now. Being the sole members of the sweaty, garage rock outfit The Pack AD, it’s often brought to their attention how rare it is for women to play with such cojones. But it’s not balls The Pack AD have, it’s pure, blistering talent. Their bluesy whiskey-rock, such as this song, “Crazy,” is packing venues nationwide. Here’s why: