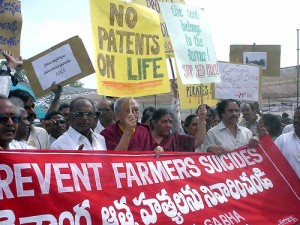 Vandana Shiva with a Tibetan Monk (the Refugee Government ex-Minister of Agriculture) attend a demonstration against Monsanto in Hyderabad, India in 2003. Photo by Naoko Yatani courtesy of Flickr user skasuga.

Monsanto has donated 475 tonnes, that’s $4 million worth, of hybrid vegetable seeds to Haiti, proving that a devastated nation is land ripe for corporate sowing.

But at least one of Haiti’s major peasant-driven activist groups is looking a gift horse in the mouth.

In an article for The Huffington Post, Beverly Bell explains

“A new earthquake” is what peasant farmer leader Chavannes Jean-Baptiste of the Peasant Movement of Papay (MPP) called the news…The MPP has committed to burning Monsanto’s seeds, and has called for a march to protest the corporation’s presence in Haiti on June 4, for World Environment Day.

Chavannes Jean-Baptiste, the Executive Director of MPP and the spokesperson for the National Peasant Movement of the Congress of Papay (MPNKP), called the entry of Monsanto seeds into Haiti “a very strong attack on small agriculture, on farmers, on biodiversity, on Creole seeds…, and on what is left our environment in Haiti.”

At this point, Haiti doesn’t have any policy governing the use of genetically modified organisms (GMOs) and so its Ministry of Agriculture nixed Monsanto original offer of Roundup ready GM frankenseeds. Not that the hybrid seeds are much better.

The hybrid corn seeds Monsanto has donated to Haiti are treated with the fungicide Maxim XO, and the calypso tomato seeds are treated with thiram. Thiram belongs to a highly toxic class of chemicals called ethylene bisdithiocarbamates (EBDCs). Results of tests of EBDCs on mice and rats caused concern to the U.S. Environmental Protection Agency (EPA), which then ordered a special review. The EPA determined that EBDC-treated plants are so dangerous to agricultural workers that they must wear special protective clothing when handling them.

Monsanto’s passing mention of thiram to Ministry of Agriculture officials in an email contained no explanation of the dangers, nor any offer of special clothing or training for those who will be farming with the toxic seeds.

Apparently Monsanto–you might remember them from previous life affirming chemical projects like Agent Orange—has left those responsibilities to U.S. foreign assistance workers. What could go wrong there?