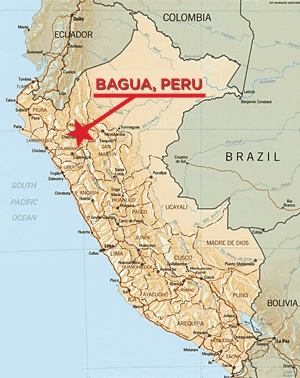 A war broke out this month. A war not to the east but to the south, that has been little covered by the media. It comes complete with human rights violations, murder, and corruption caused by the exploitation of the Amazon. The blood of this war is on Canada’s hands.

On Friday, June 5, an estimated 600 Peruvian police officers opened fire on thousands of peaceful indigenous protesters blocking the destruction of their Amazon homeland on a road near Bagua in Peru. This joint police-military operation went awry when 30 protesters and 24 police offers were killed in one of the worst clashes in a decade, causing a war between the Peruvian government and Indigenous peoples.

For the past two months, over 30,000 Indigenous Peruvians have mounted fuel and transport blockades to disrupt the exploitation of the Amazon rainforest. They are working to block the advancement of free trade agreements that opens the Amazon and indigenous land for business with foreign investors. The trade agreement, specifically with Canada and America, seeks oil, minerals, timber, and agriculture, which will in effect devastate the greatest carbon sink on the planet, accelerating climate change. 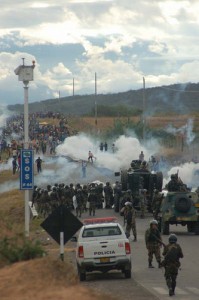 “If anyone still had doubts about the true nature of these free trade agreements, the actions of the Peruvian government make it clear that they are really about putting foreign investment ahead of everything else, including the livelihoods — and even the lives — of indigenous people,” says Jamie Kneen, Communications and Outreach Coordinator for MiningWatch Canada.

Earlier this month, Peru’s president, Alan Garcia, said the indigenous protesters were standing in the way of progress, modernity, and were part of an international conspiracy to keep Peru impoverished with their blockades.

“Garcia seemed to imply the Natives were a band of terrorists as he stood in front of hundreds of military officers in a nationally televised speech,” says Ben Powless, a reporter from the frontlines with Rabble.ca.  “He continued to decry the Indian barbarity and savagery, and called for all police and military to stand against savagery.”

There are conflicting stories on the accounts of what took place on the June 5 bloodbath. Police dispatches claim that when they arrived to physically remove protesters, many officers were disarmed, killed, or taken prisoner by the protesters.

But indigenous people and families of missing protesters say that the police came looking for a fight. Police and military acted in a violent sweep, searching local towns and houses for protesters, shooting to kill.

A human rights lawyer in the region told the BBC that while 30 protesters have been officially proclaimed dead, hundreds still remain unaccounted for. Locals are accusing police of burning bodies, throwing them in the river from helicopters, and removing the wounded from hospitals to hide the real number of casualties.

Powless reports that a curfew has been imposed on the local towns near the area of Bagua and these Amazonian towns have become militarized. The government has begun persecuting and threatening jail for local indigenous leaders. And fear is growing that the government is trying to build support in further repressing the protesters.

“This is not a path to peace and reconciliation,” says Powless.

One Canadian company that will benefit directly from this rollback of indigenous rights is the Alberta-based petrochemical firm Petrolifera. The Peruvian government recently signed an agreement with Petrolifera to explore land inhabited by one of the world’s last uncontacted tribes, a blatant human rights violation for the purposes of enriching the tar sands development.

“Canada is the largest investor in Peru’s mining sector. If people are being killed on behalf of Canadian investors, to promote and protect investment projects on Indigenous land, then their blood is on our hands,” says MiningWatch Canada’s Kneen.

Last Wednesday, the Canadian Senate passed Bill C-24, which furthered the Canada-Peru free trade agreement by implementing legislation protecting it. Despite this bloody civil war for the Amazon and indigenous rights, the first bilateral agreement Canada has signed for the Americas since 2001 was approved, by the Conservatives and the Liberals. Prompting the question once again: whose interests are being looked after?