With all this hand-wringing over firebombs and security perimeters, perhaps it’s time to put our hands to better use. I’m talking, of course, about getting creative when the G8/G20 rolls into the province next month.

John Greyson, filmmaker and York University professor, posted this short film on his Vimeo site a few days ago. Greyson’s video has touched upon a spirit of creative resistance that has been present throughout many of the anti- or alter-globalization demonstrations of the past. 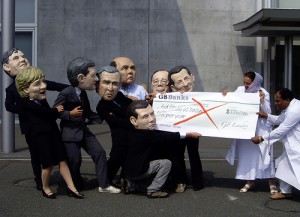 There was that time in 2001 when a group protesting the Summit of the Americas in Quebec City constructed a teddy bear catapult. Oxfam has repeatedly used giant papier mache heads to stage hilarious photos that carry a message (word has it, we’ll see those heads on the streets of Toronto when the G20 arrives,) and the odds are very good that come June, an army of rebel clowns will descend upon the city, possibly looking for tiny cars to pile into and then emerge from, (perhaps to illustrate how damaging car culture can be?)

Greyson’s call to arts is a nice reminder that the possibilities for actions of creative resistance are infinite.