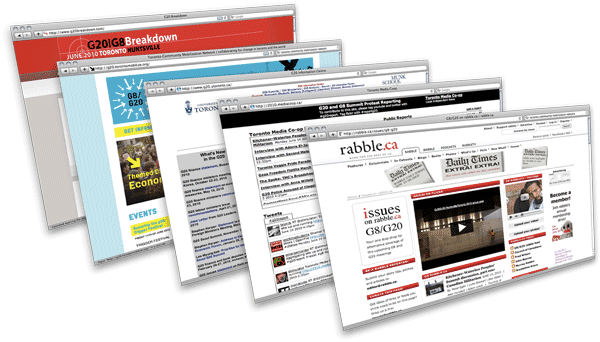 The G20 is less than two weeks away, and there’s a lot going on. You could just turn to the usual media suspects to get your news about the G20, but when it comes to the street-level collision of neoconservative colonialist plutocrats and anti-globalization activists (among many other blocs of interests), it pays to look off the beaten path for your news consumption. If previous G20 meetings and the demonstrations that accompanied them is any indication, you can’t trust big media to get beyond the usual hackneyed portrayals of anarchists in balaclavas and be-suited politicians doing photo-ops.

(We’ll be doing our very small part during the next two weeks by clipping and aggregating the best material we find on our G20 microblog — g20.this.org — and we welcome you to send us your photos, videos, blog posts, and links for sharing. Simply email [email protected] and we’ll take care of the rest.)

Here are the indie news sources we’ll be following in the next few weeks. Respond in the comments section if you have further sites that people should visit! 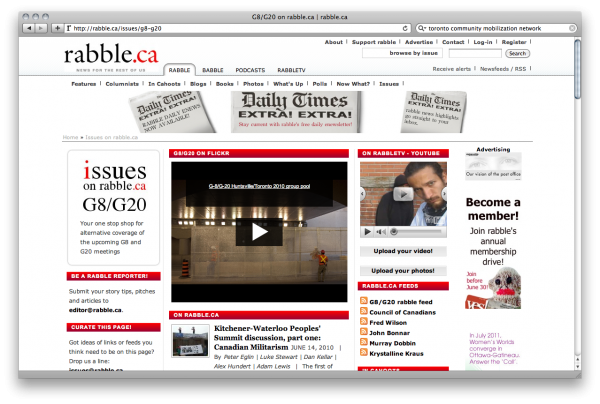 Our friends at Rabble have put together one of their “issues” pages that collects all of their G20 news and commentary in one easy-to-scan package. At a glance you can see any G20 related video on RabbleTV, submissions to the G20 Flickr group, what they’re tweeting and retweeting, and what their lively commentariat is saying on their message boards, Babble. 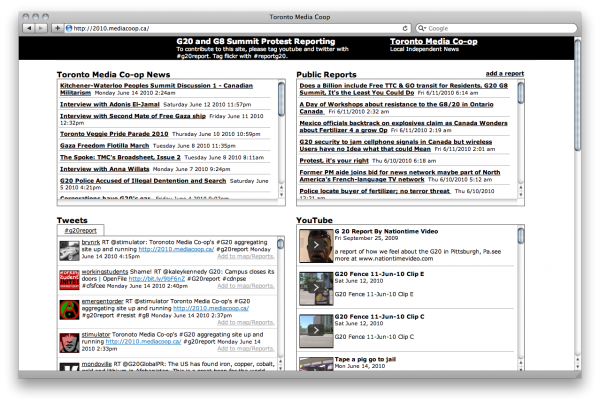 The Media Co-op is a grassroots network of independent news reporting collectives based in different cities coast to coast. Together, the co-op publishes The Dominion. The Toronto branch of the Media Co-op has set up a spartan but information-rich aggregation page for collecting photos, videos, tweets, news reports, and their own original reporting. 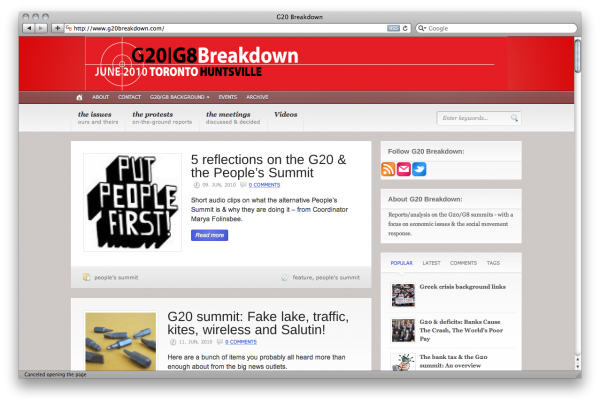 Darren Puscas started G20 Breakdown a few months ago and for a one-man operation, it features a lot of coverage. Puscas’ main areas of interest are economic and environmental issues, but he’s going to be on the ground in Toronto reporting directly on the People’s Summit this coming weekend, and the G20 itself the week after. 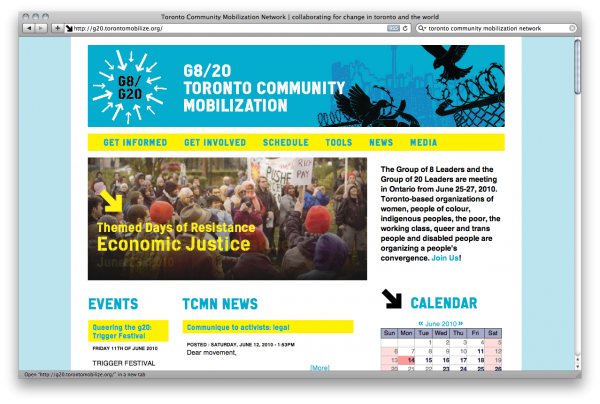 The Toronto Community Mobilization Network is the coalition of activist groups that is coordinating and publicizing the flood of social justice-themed events — demonstrations, concerts, panel discussions, parties, and more — in response to the G20. Their website won’t be so much a source of reporting as a place to keep on top of an ever-shifting schedule of stuff to do. 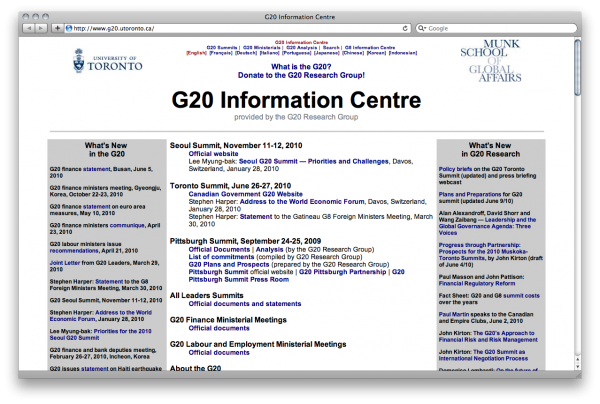 The G20 Research Group is an academic flying squad at the University of Toronto’s Munk School of Global Affairs, a largely student-run group that collects and sifts through the massive piles of information that the G20 produces. The emphasis here is on data, though there is some academic commentary (from across the political spectrum). The research group also sends students to the summit proper to report on individual meetings and press conferences. The academic analysis doesn’t always make for the most exciting reading, but when you’re the kind of reader who wants footnotes, this is your place.