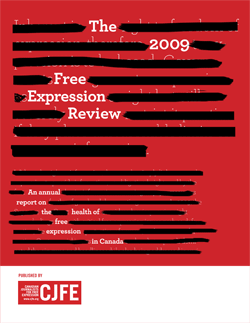 Today, which is, appropriately, World Press Freedom Day, Canadian Journalists for Free Expression released their first in what will be an annual series of reports on the state of free expression in Canada. As the authors note in the introduction, 2009 was a notable year in Canadian press freedom:

The study includes a report card that assigns grades to different institutions and their openness to public scrutiny, or their actions that make that scrutiny possible. The Supreme Court gets an A for the new defamation defence; The Canadian Human Rights Commission gets a B for deeming the hate speech provision of the Canadian Human Rights Code unconstitutional in the Marc Lemire case; on publication bans in the courts, appeals courts get a B+, while trial courts get a C-. Continuing the drumbeat of discontent over the federal government’s lack of transparency, it gets an F:

Here, the only assessment can be a failing grade.We remain bedevilled by the antics of those federal entities that invoke national security at the drop of a hat to restrict the dissemination of vital information to journalists and, in turn, the public. Perhaps this attitude is best exemplified by a recent exchange between a federal government lawyer and the Military Police Complaints Commission, in which the lawyer not only challenged the commission’s right to obtain certain government documents on detainee transfers but went so far as to indicate that he was not at liberty to discuss when those documents might be available. Add to this the countless delays and roadblocks put in the way of access to information and we are left wondering how the prime minister could praise the media’s attempt to hold government accountable while abandoning his own promises of access reforms so loudly trumpeted on the campaign trail.